Who Is Erik August Söderlund?

April 03, 2015
I am always working to make my family tree as perfect as I can which hasn't allowed much time for research, actually no time at all the last few years. (This restriction I put on myself so I would get my tree in order.) Now, I am following Thomas MacEntee's Genealogy Do Over. (I believe I am on Week 4. The second round of this series started again this week if you are interested. I highly recommend at least taking a look...) I needed to take a break from the "Do Over" however to prepare for visitors and then host them. I was fortunate to have eight visitors from Sweden stay at my home for a couple of weeks very recently, my cousin and his family. After they left, I went about cleaning, doing laundry and reminiscing. As I was reminiscing about my visitors, I decided I really wanted to know who the man was that my grandfather lived with while growing up here in the United States.


Rumors fly, but I never took the incentive to really focus in on the man who raised my grandfather. His name was Erik August Söderlund. Let's just say, I was suppose to research him last night, because the information I found I shouldn't have had access to, at least as far as I know. But I did have access and I am NOT complaining!


The "Söderlund's" were suppose to connect to the "Lundberg" family, somehow, as rumors have it. (Lundberg was my birth name in case you didn't know.) I often wondered if this man, Erik Söderlund, whoever he was, was the person who paid for my great grandmother's headstone in Sweden... my grandfather's sister is also buried here. 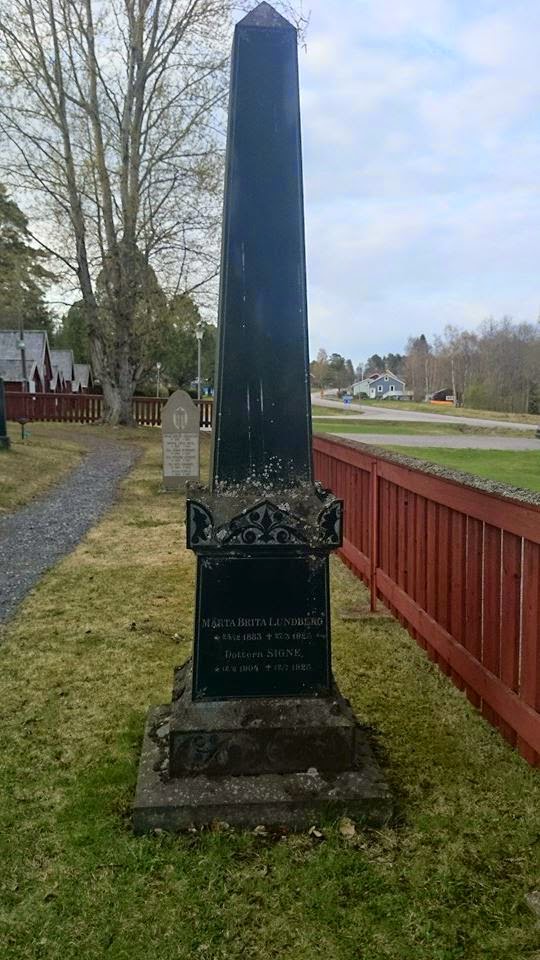 When I went to Sweden and saw the headstone, I was amazed by how tall it was. It was the tallest in the cemetery. Many of the other headstones from that era were probably gone because no one paid to keep the headstones there. Most of the cemetery is full of "flat"(on the ground) headstones today. With the assistance of my cousin in Sweden, Jan(my recent visitor), we paid for her headstone to stay in place for another 10 years. I think I am the only one here in the U.S. who is truly happy about this, but that is all that matters, right? My cousin, Jan, however knows how much it means to me, because he went and cleaned the stone for me after I came back home. I sure hope I remembered to thank him.


Someone had money to pay for my great grandmother's gravestone, and it is beyond me who it was. My great grandmother, Märta Brita Lundberg, certainly didn't have any money and she never married. Because Erik Söderlund came to the U.S. and raised my grandfather here, I have always wondered if he paid for the headstone. But I really know nothing much about him, and I do not know much about any others in Sweden either. It is easy to "assume" he paid for the headstone. I also assumed other things too, but I learned a while back never to assume anything! One day, I hope this mystery will be solved.


Erik had a son, Carl Söderlund, who was 12 years or so younger than my grandfather, Erik. According to one of the New York passenger lists, in Oct 1926, Erik Söderlund (age 57), Carl Söderlund (age 5) and Erik Lundberg (listed as nephew to Erik Söderlund age 17) arrived at a port in the U.S. having left from Gothenburg (Göteburg), Sweden. My Lundberg family states that my grandfather always said Carl was his half brother. He also stated he had another half brother too...with a different last name! But that research will be for another time.

So, what did I find last night? Well, I am working up to it, maybe in the next post?