I went to kindergarten at a school in Oakland, California but I do not remember the name of it. We lived right around the corner from the school and I walked to it.

First and second grade I attended another school, Burbank, also in Oakland. Third through sixth grade I went to Lorenzo Manor in San Lorenzo. I lived in two houses while attending this school and walked to the school from both houses. I remember things about grammar school, but not a first day.

Now that my grandchildren are in school, grammar school and middle school have combined within the same school. I thought it was crazy having older kids at the same school as the young ones.

I have learned however that the schedules of different grade levels of students is such that the older kids come and go at different times of the day. When I pick up my grandson from first grade, I like to get there early. I make sure I am in the hall when he gets out of class so he can see me. Ten or fifteen minutes before he gets out of class, the older kids get out of school and have disappeared by the time the lower grades are released.

Next for me came four years of high school as well as 2 1/2 years (part time) of cosmetology school at the same time. Do I remember a first day of school during any of these times? No, I am afraid I don't. I remember being excited and a bit nervous with the start of each school year. I liked school and got good grades. 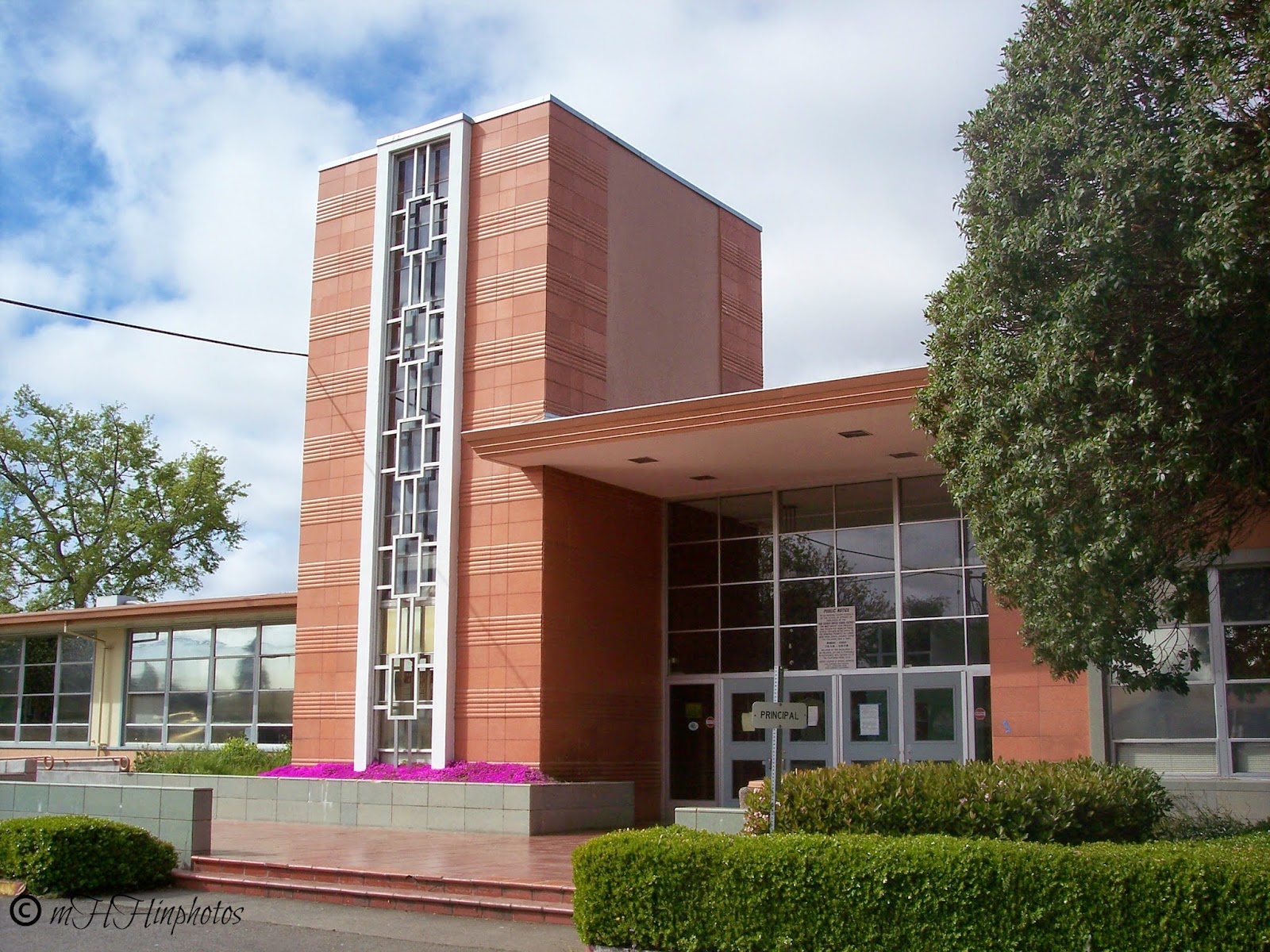 The furthest school I walked to was about one mile and that was the high school I attended. I remember walking to school and home from third grade on, although as I said I walked to school in kindergarten also. I am not sure, but I probably walked to school in first and second grade too. When I was attending cosmetology school (Don's Beauty School in Hayward, California) I used the bus system as well as walking because the beauty school was not within walking distance.

Living in California, the first day of school is always a great day weather wise. Most times the first day (we started the day after Labor Day, in September) was still really warm. Kids today start school in late August, which is generally hotter yet. 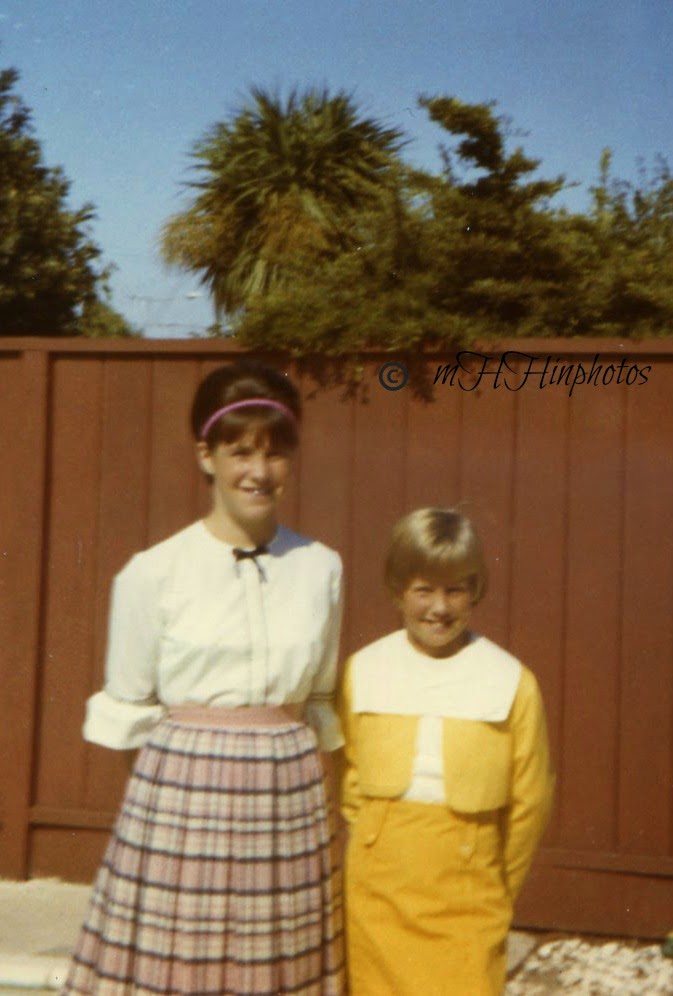 My mother always had final say on what we wore to school. The school rule at the time was that we had to wear dresses. When I was a freshman in high school (9th grade) the rules changed. Pants were finally allowed, but my mother didn't allow it. She wasn't thrilled about girls wearing pants. I think it was a year or two later before she allowed me to wear pants to school.

My mother loved the "pixie" hair cuts, so all three of us girls grew up with that hair cut. When I was in fourth grade I received what was maybe my first pixie haircut. I walked to school the next day very slowly and I got there late. I wouldn't go in the classroom. I stood outside the classroom crying until the principal found me and worked with the teacher to get me into the class. I hated those pixie haircuts! 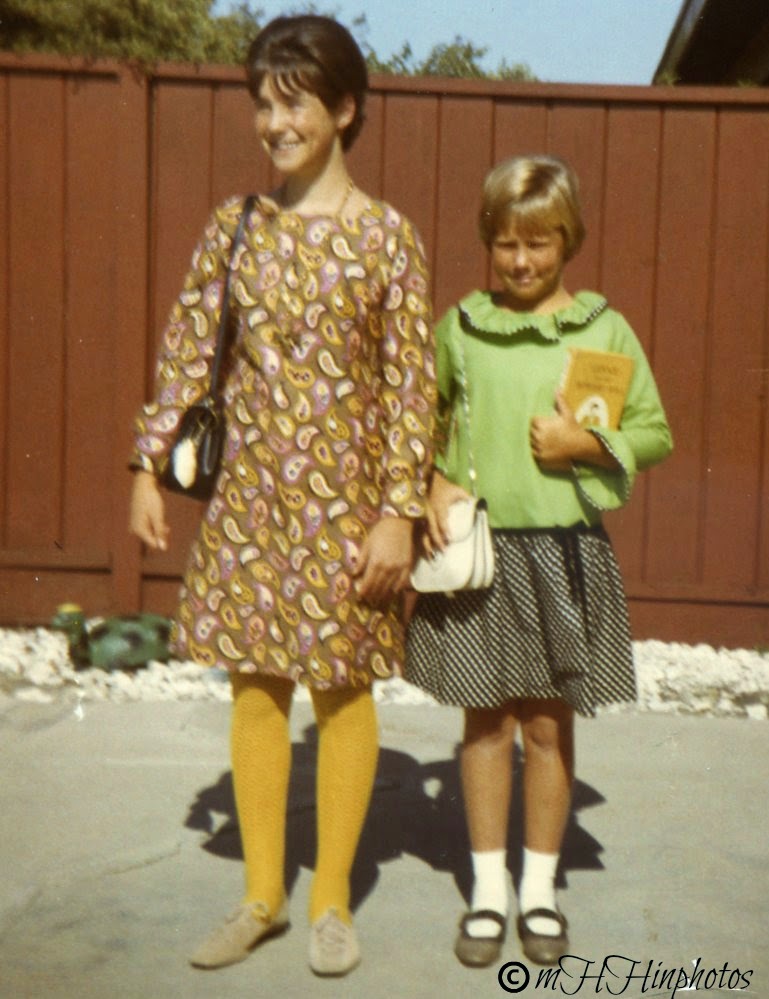 My sister and me, I believe 1970.
I made my dress, ugly color tights, but they matched.

I had a few favorite teachers throughout my school years. Most favorites were from grammar school. The first favorite that comes to mind would be my sixth grade teacher, he was awesome. His name was Mr. Mc Laughlin. I liked all of my teachers in grammar school I think because I liked school in general.

I have one friend from third grade whom I have remained friends with to this day, Cindy. In fact we met for lunch about a month ago. We do not see each other very often, but when we do see each other, it is as if we saw each other yesterday, but with so much to catch up on! We will be forever friends.