I am participating in Julie Goucher's activity:
The Book of Me, Written by You.
This week's prompt~Prompt 27~Cars and Transport

As far back as I can remember my family has always had a car and at some point they became two car owners, his and hers. Dad had a Pinto for a few years which he drove to work, while my mom had the "family car," which all five of us could comfortably sit in. At this point and time in our lives we lived in a house that was at the dead end of a street. If you didn't turn left or right you would run into our house. Mom's car was always parked on the garage, dad's on the street in front of the house.

One day we woke to find Dad's car basically on our front porch! I never heard his car getting hit and I dot believe anyone else did either. We had a photo of this mayhem, but I haven't seen that in years. (Of course if the photo shows up, I will add it to this post.)

I learned to drive while in high school. The first time I had to go on the freeway, I was a nervous wreck! Merging was something I needed more practice with at that time. But, I got lucky and passed the class as well as the drivers test the first time I took it.

My first car was a tuna boat, at least that was what I called it. Dad came with me to buy my car. There was a smaller car I liked, but don't remember what it was. Dad insisted however that I buy the tuna boat. I think he felt there would be more car to protect me if something, heaven forbid, were to happen. I paid for the blue, 1966 Buick Le Sabre myself. I believe it was $600. I liked it because it was my favorite color and I had enough money to pay for it. The longest trip I remember taking in this car was to Yosemite. My roommate and I went camping, but that is another story. 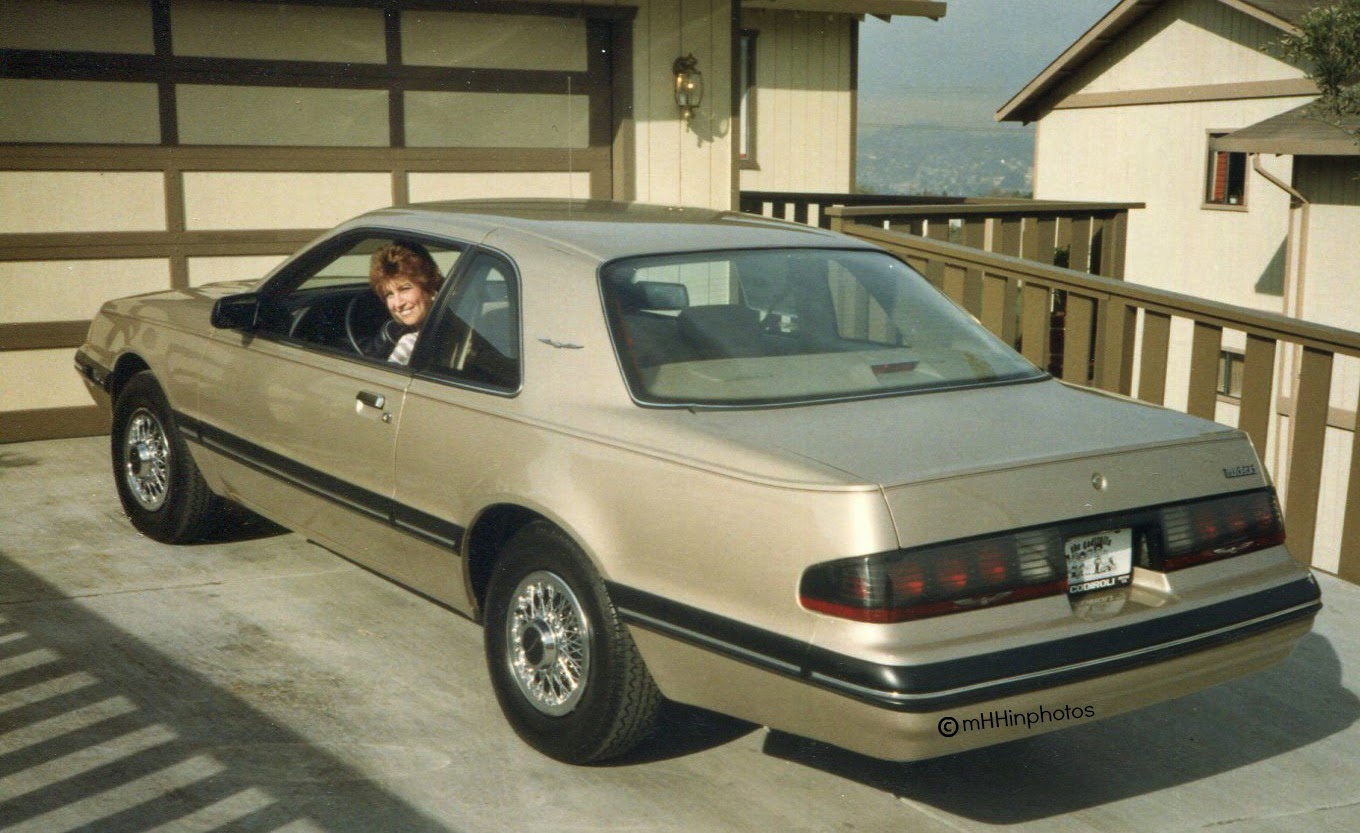 At my parents driveway the morning after this car was purchased.

I do not remember registration details, nor did I name my cars. I can tell you however about my first  brand new car. It was a Ford T-Bird, beautiful soft beige in color. My husband and I bought it late one evening. The next morning I was off to my parent's house to show it off. 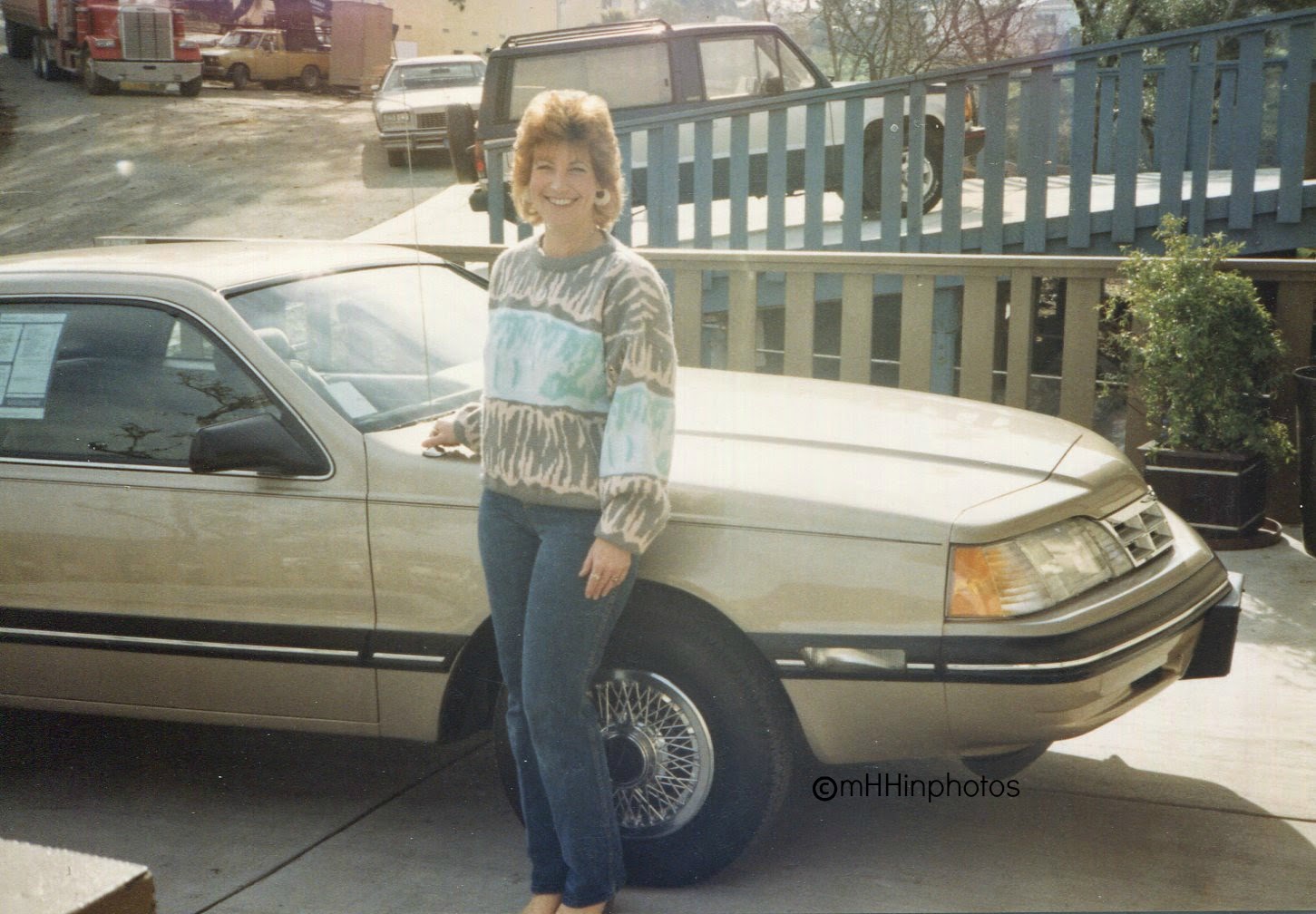 Twenty six years ago, with my new car.

Outside we went, to check out the car. I started the car so we could listen to the engine and pulled it out to the street for a better view. My parents lived on a quiet little street in the hills, which had a gorgeous view. On a clear day you could see San Francisco. 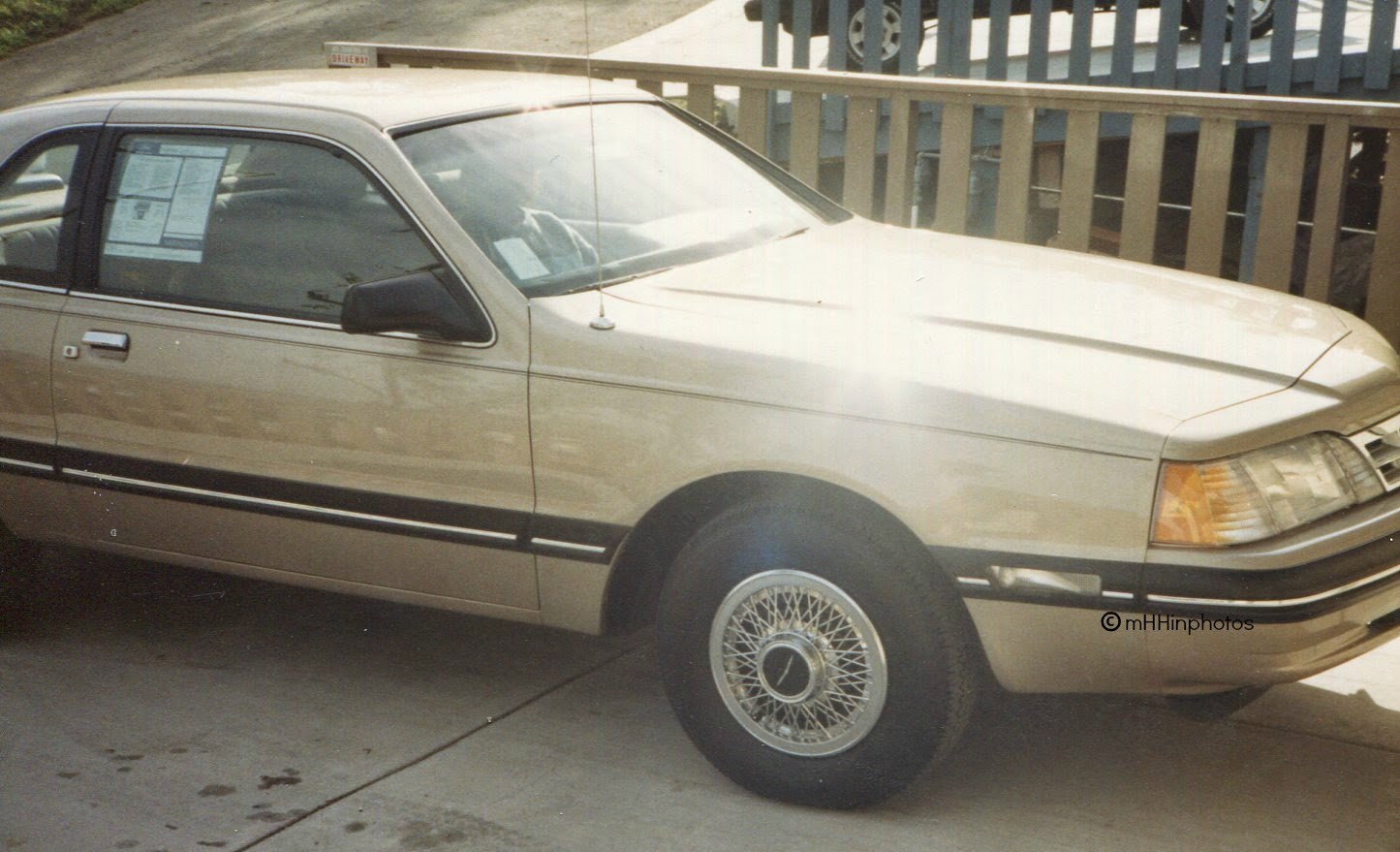 Driving the car out onto the street.

I asked if Dad wanted to take us for a spin, of course he didn't turn that down. He got in the driver's seat, mom in the passenger seat and I made my way to back. We were getting ready to take off when suddenly we saw a forklift full of wood coming down the hill straight at us. (A few houses were being built at the end of the court) Dad said, "Now wouldn't that be something if the lift dropped that wood on your car…" 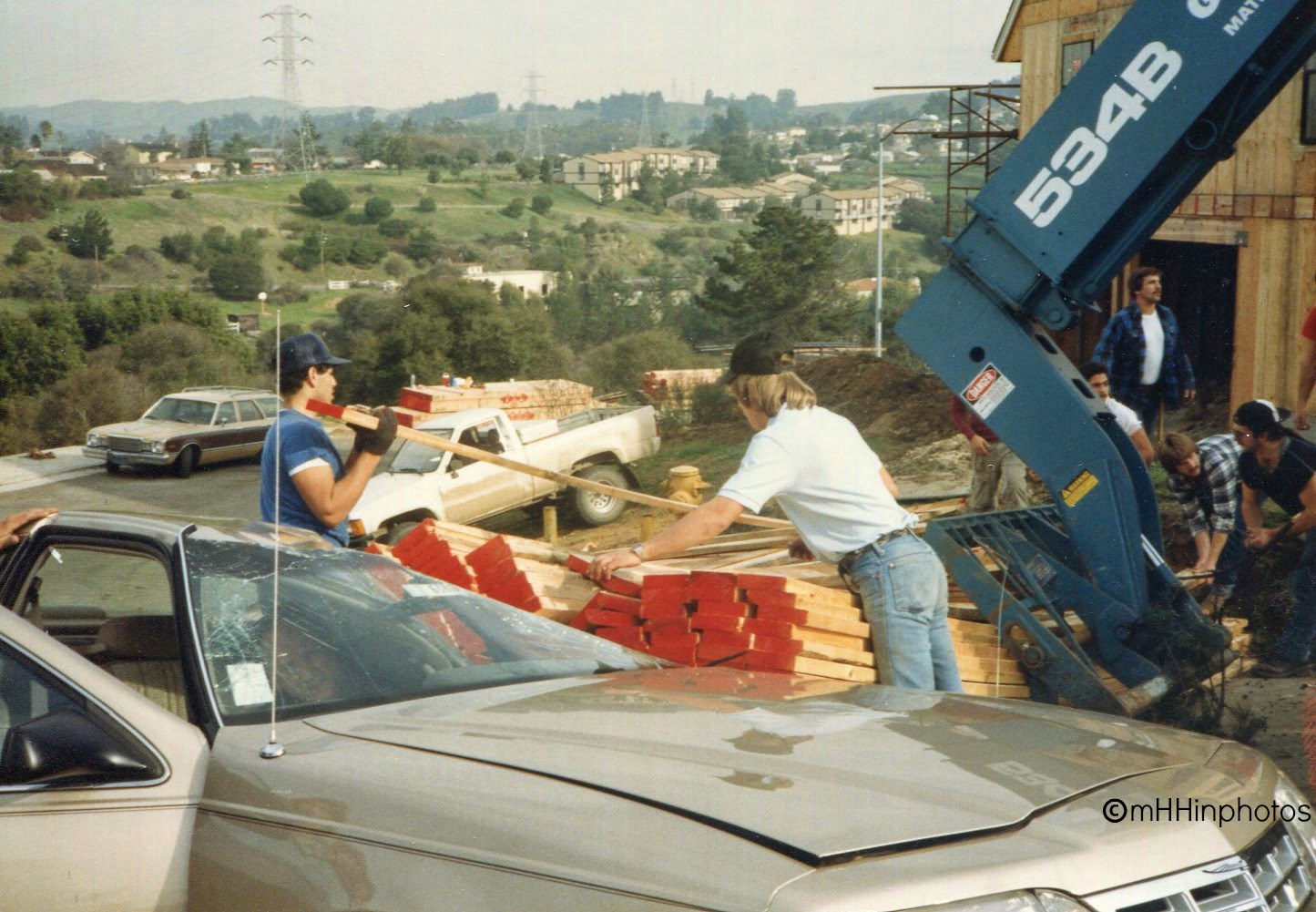 Dad is pinned in the car, you can see his face to the left of the wood.

Seemed like only two seconds later, that is exactly what happened. The forklift dropped the load of wood on top of the roof of my car, pinning my dad right there in the drivers seat. He yelled for us to get out if we could, and we did. I saw the disaster, the forklift was balancing on it's front end, and I started freaking out, fearful the forklift would fall over on my dad in the car. 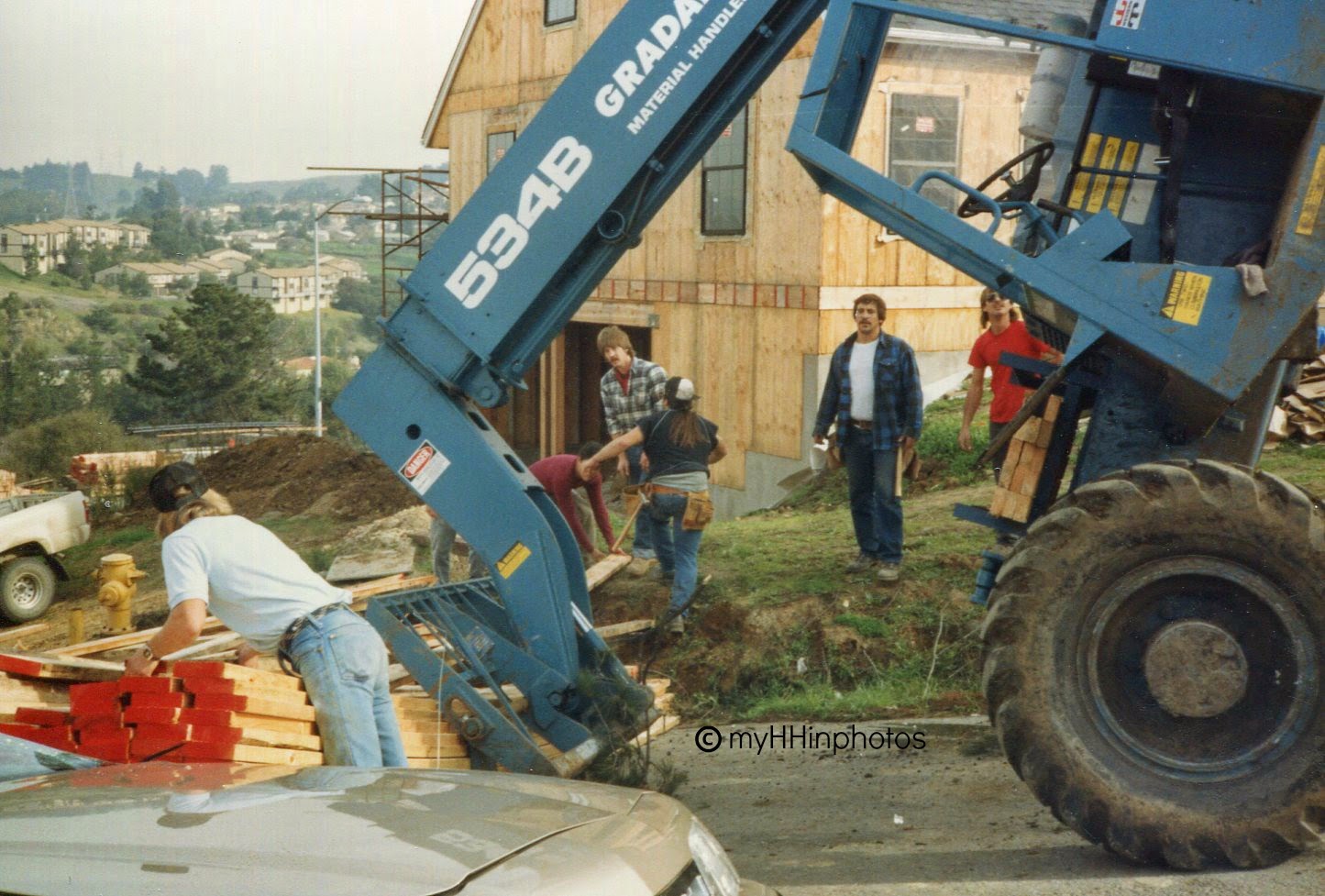 People from around the court came running to see what happened. They started removing the wood from the car.

The weight of the wood along with driving the forklift face forward down that hill wasn't a smart idea.  Dad saw the whole thing about to happen, and yet there wasn't enough time to do anything about it. The jaws of life were used to get my dad out of the car. We took him to the hospital to make sure he was ok, which he was. The car was totaled. The forklift company eventually paid us full price for the car, but my Dad fought for it. 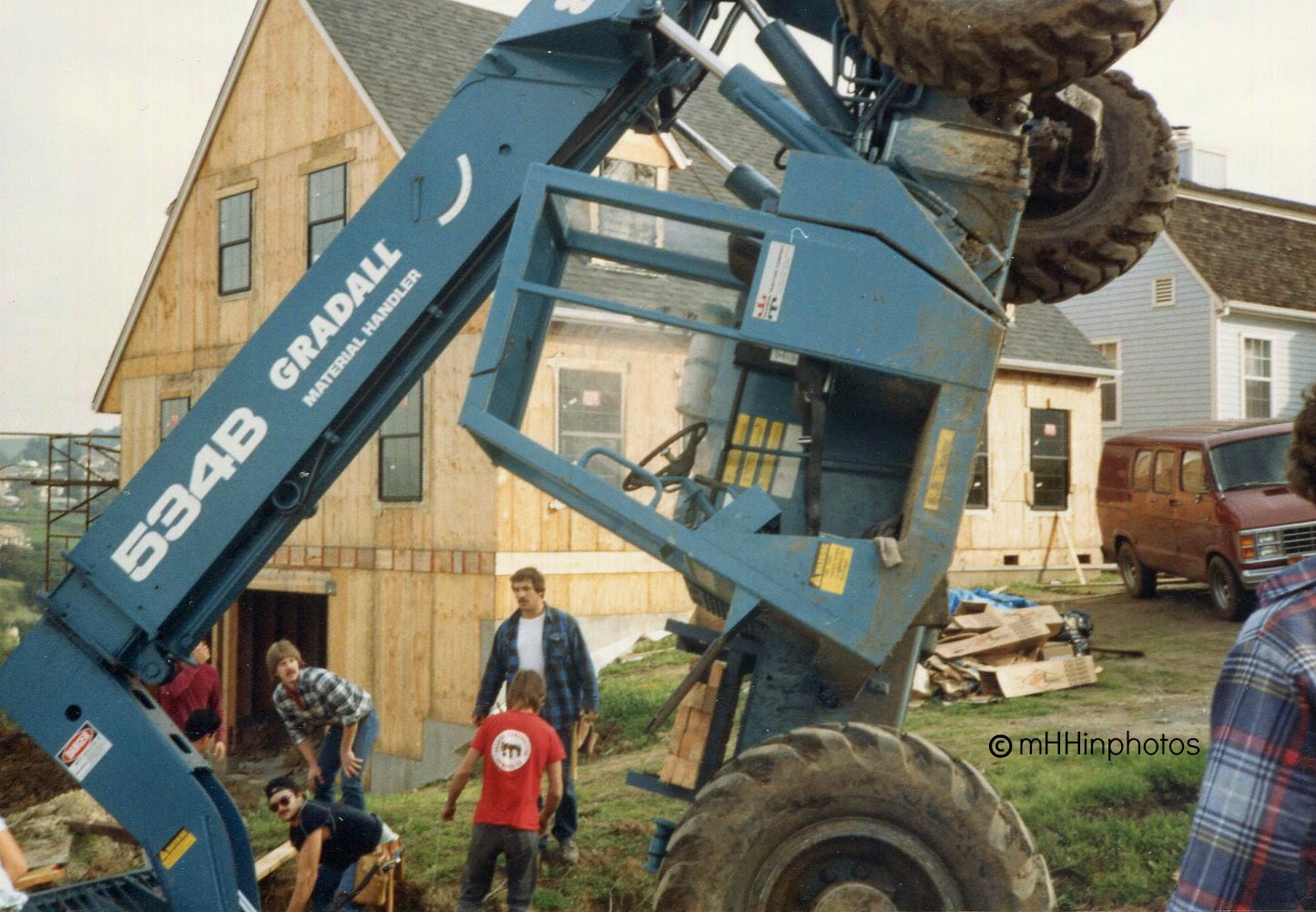 A better shot of the forklift resting on it's front tires… 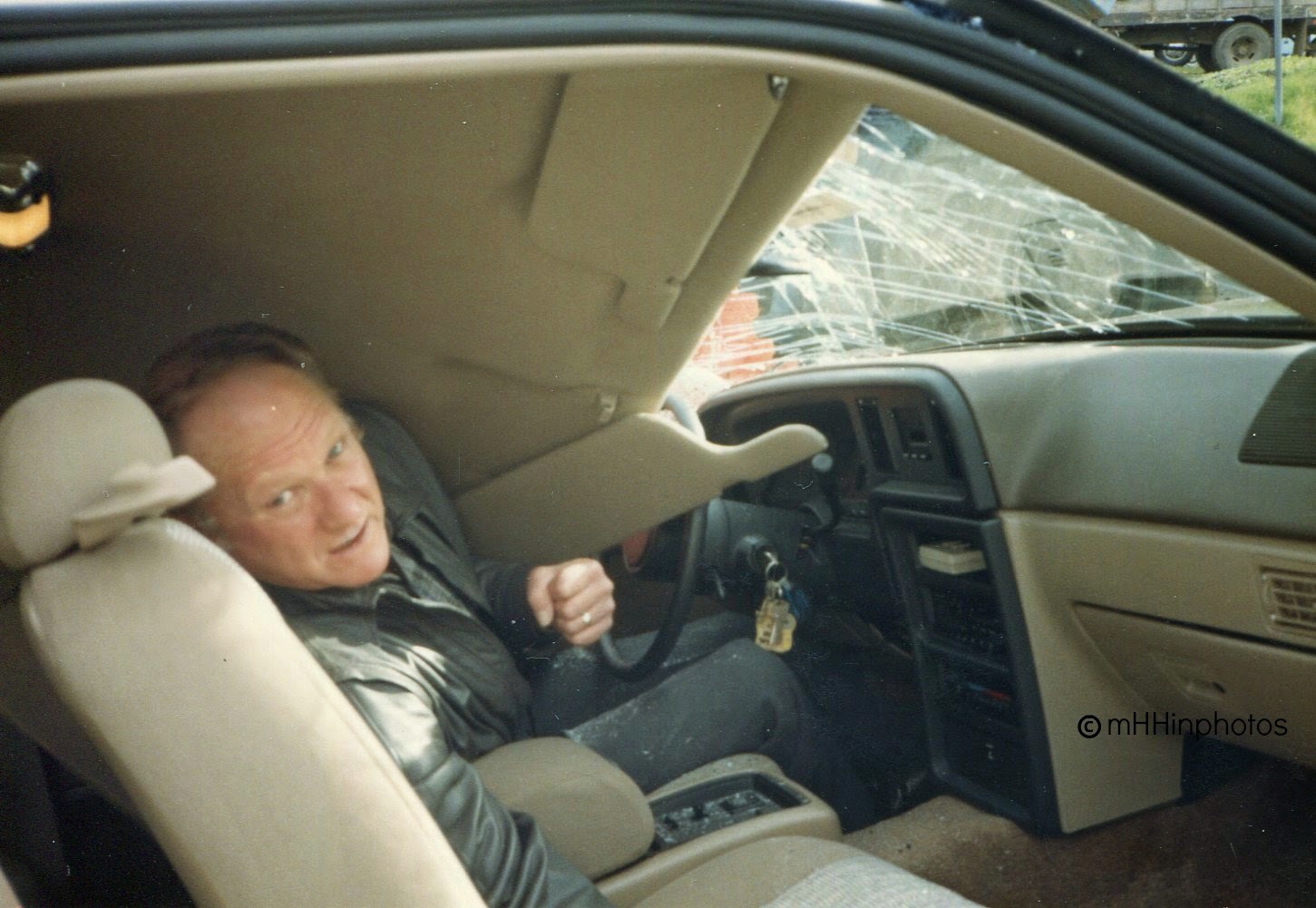 Trapped in the car, dad yelled for us to get a camera and take photos. The weight of the wood was resting on his shoulder. 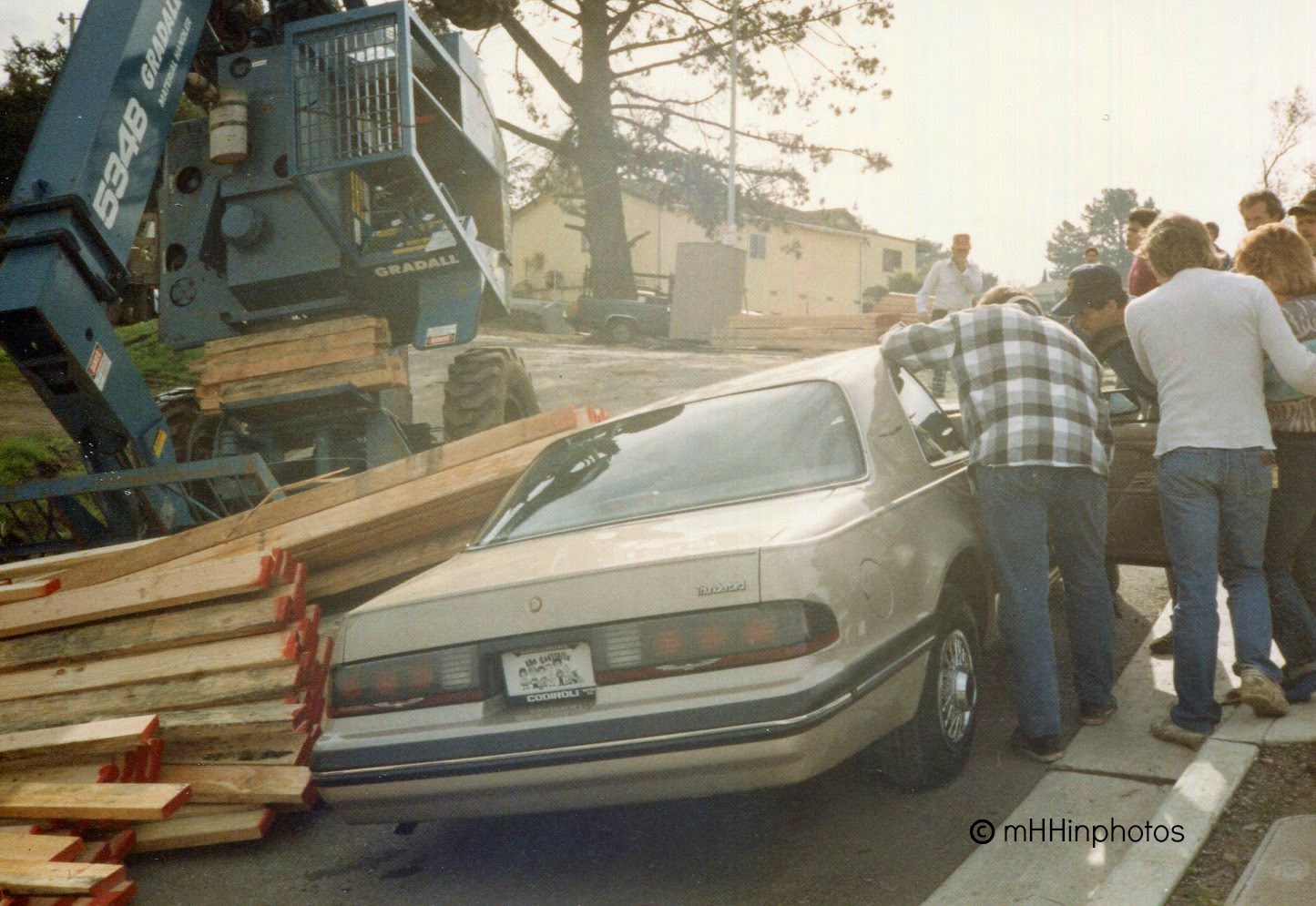 Everyone checking on my dad to make sure he was ok.

I couldn't tell you who was driving the forklift, or who any of the people were around us. It all happened so fast and I was worried about my dad and getting him to safety. 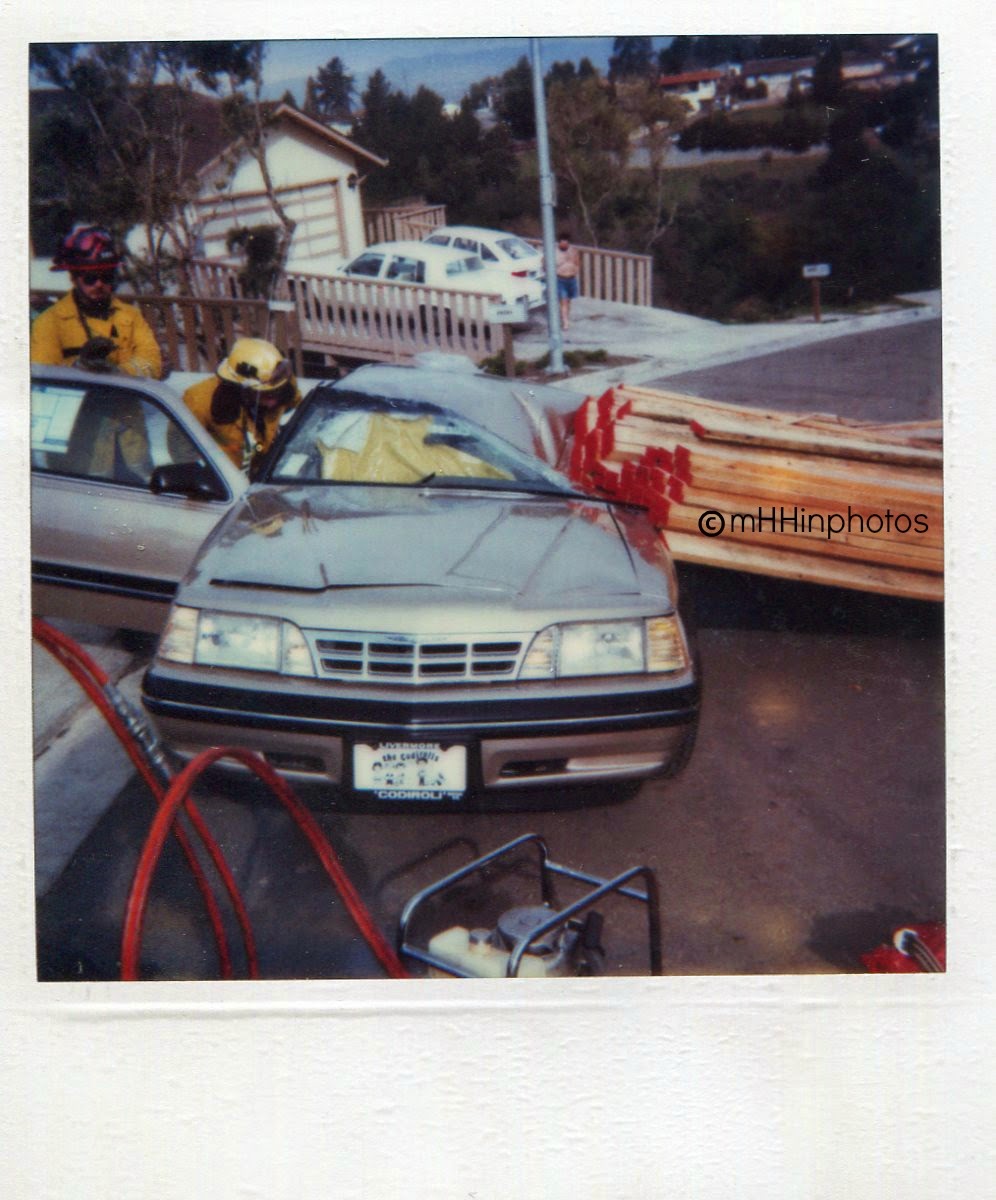 The firemen finally arrived. They covered dad to help keep the glass off of him (the yellow tarp) before they used the jaws of life to get him out of that mess. 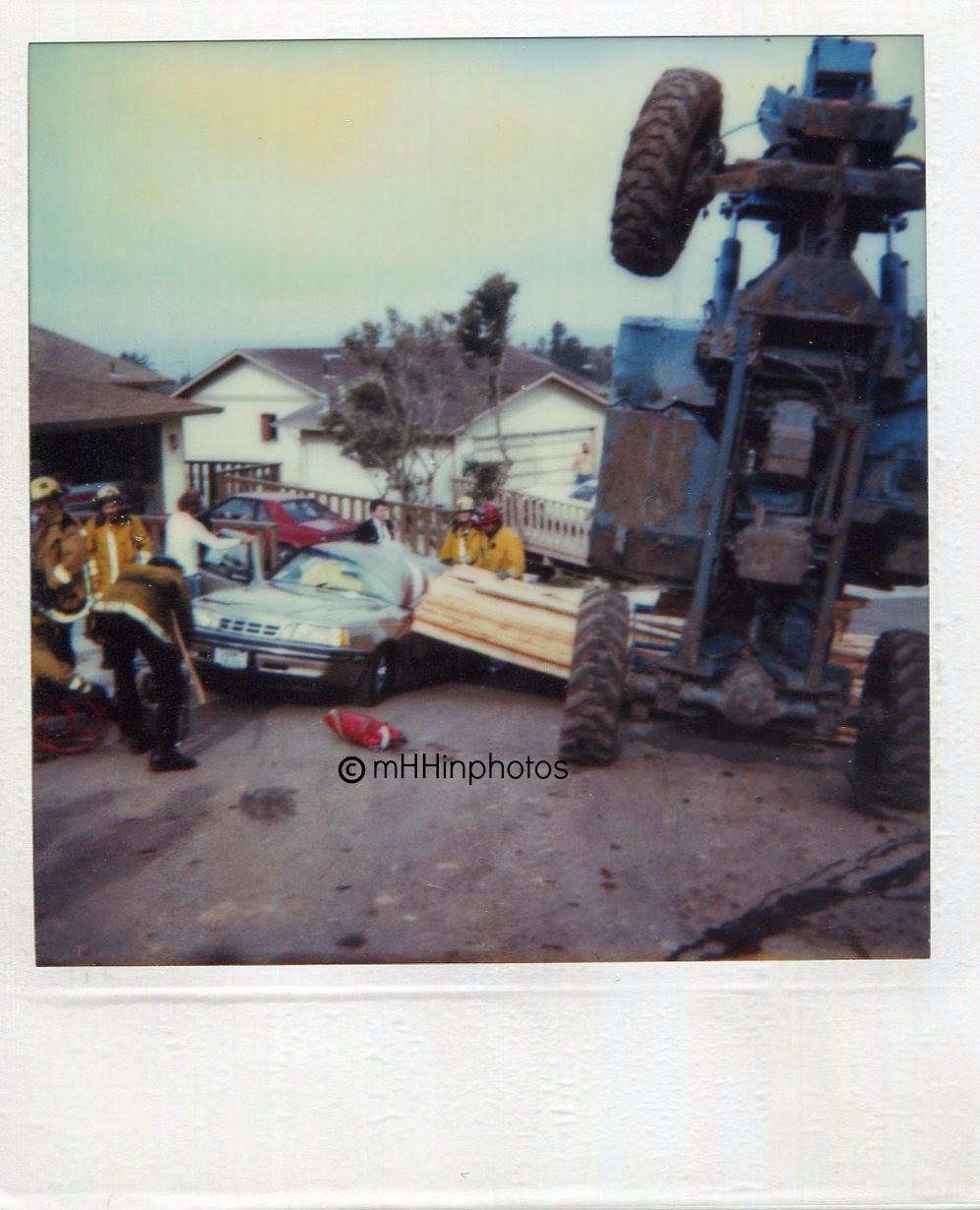 Polaroid, remember those?
It is still hard to believe this happened, and I was there. 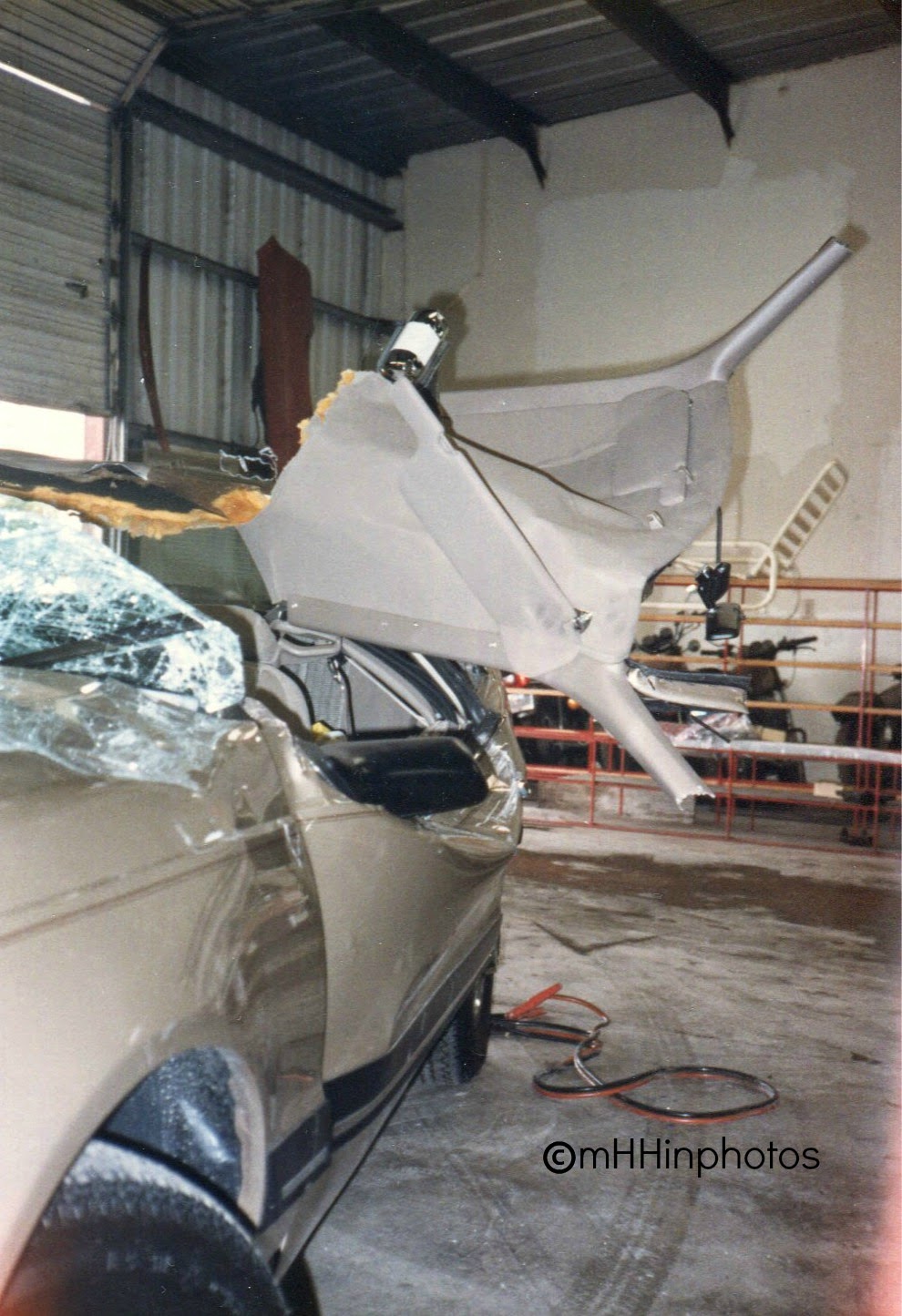 The roof that was cut away (you can actually see the visor), the drivers side of the car.
The car was towed to a garage.


I have owned many cars throughout my lifetime, I'll name a few that quickly come to mind. There have been 5 Corvettes, a Van, a few Cadillacs, an Acura, a VW Bug, a Chrysler, a couple of Hondas, a few trucks and an Infiniti, which is what I drive currently. No other car though compares to the experience I had when we bought the T-bird. 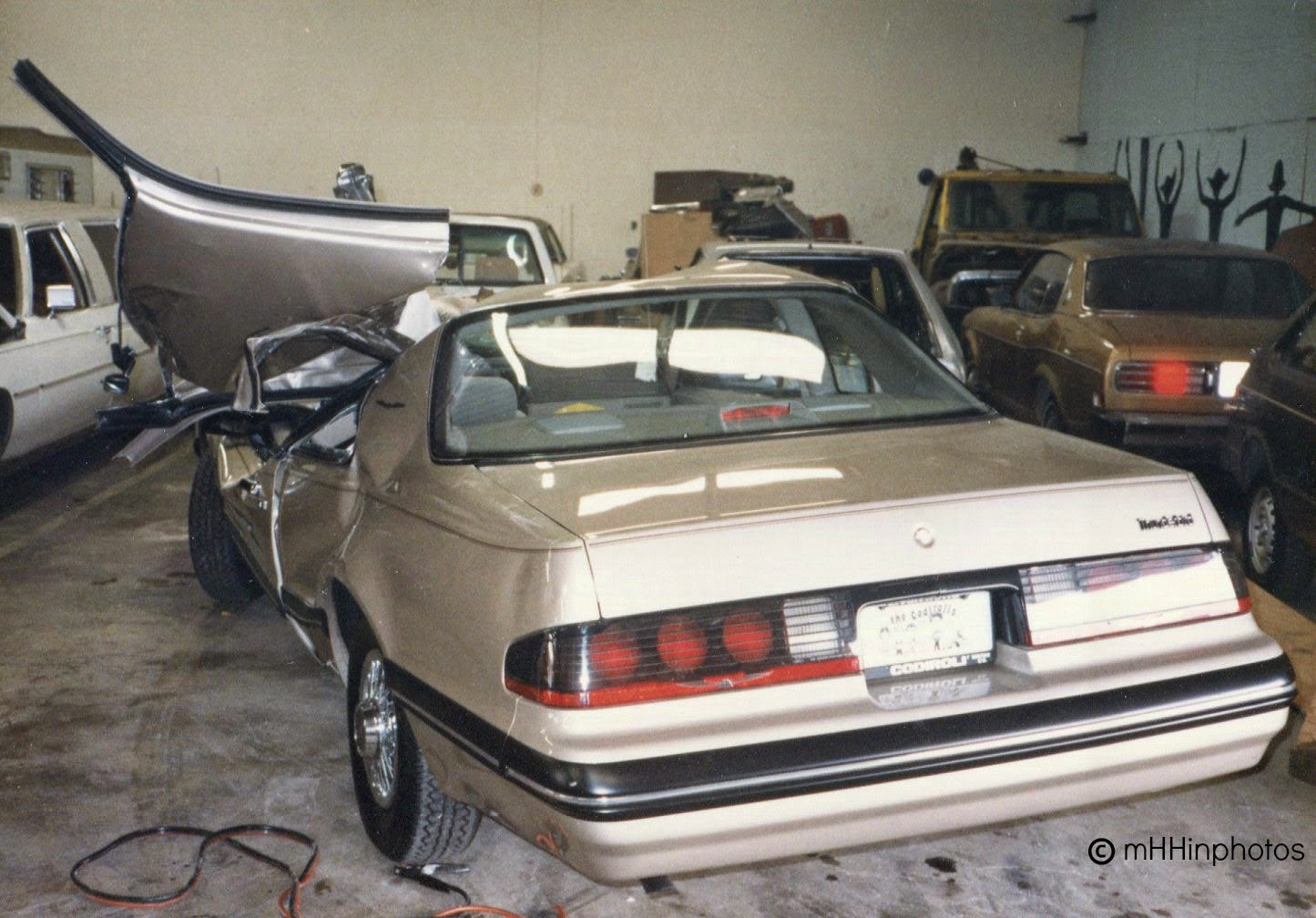 So much for my brand new car! 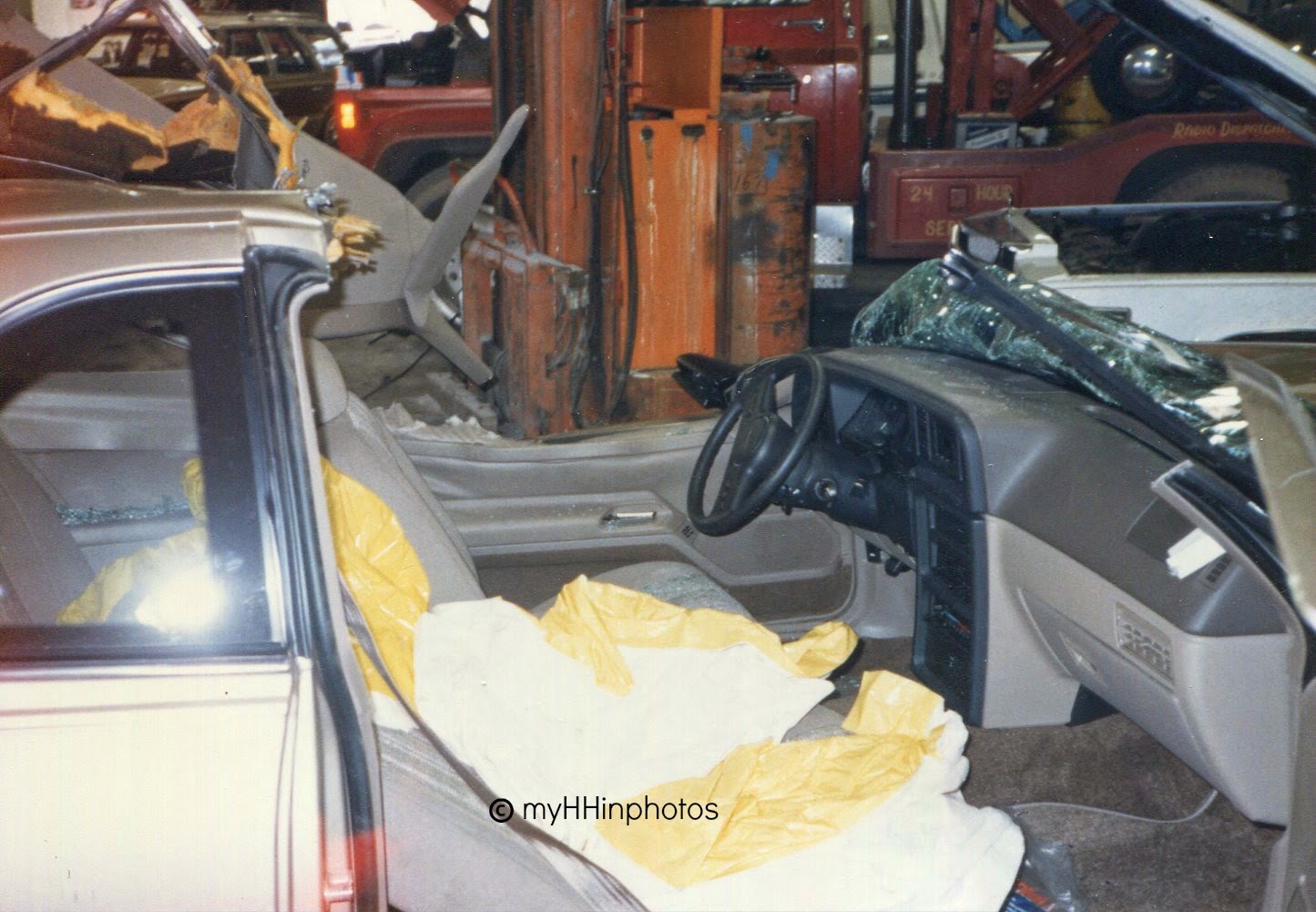 A view from the passengers side. 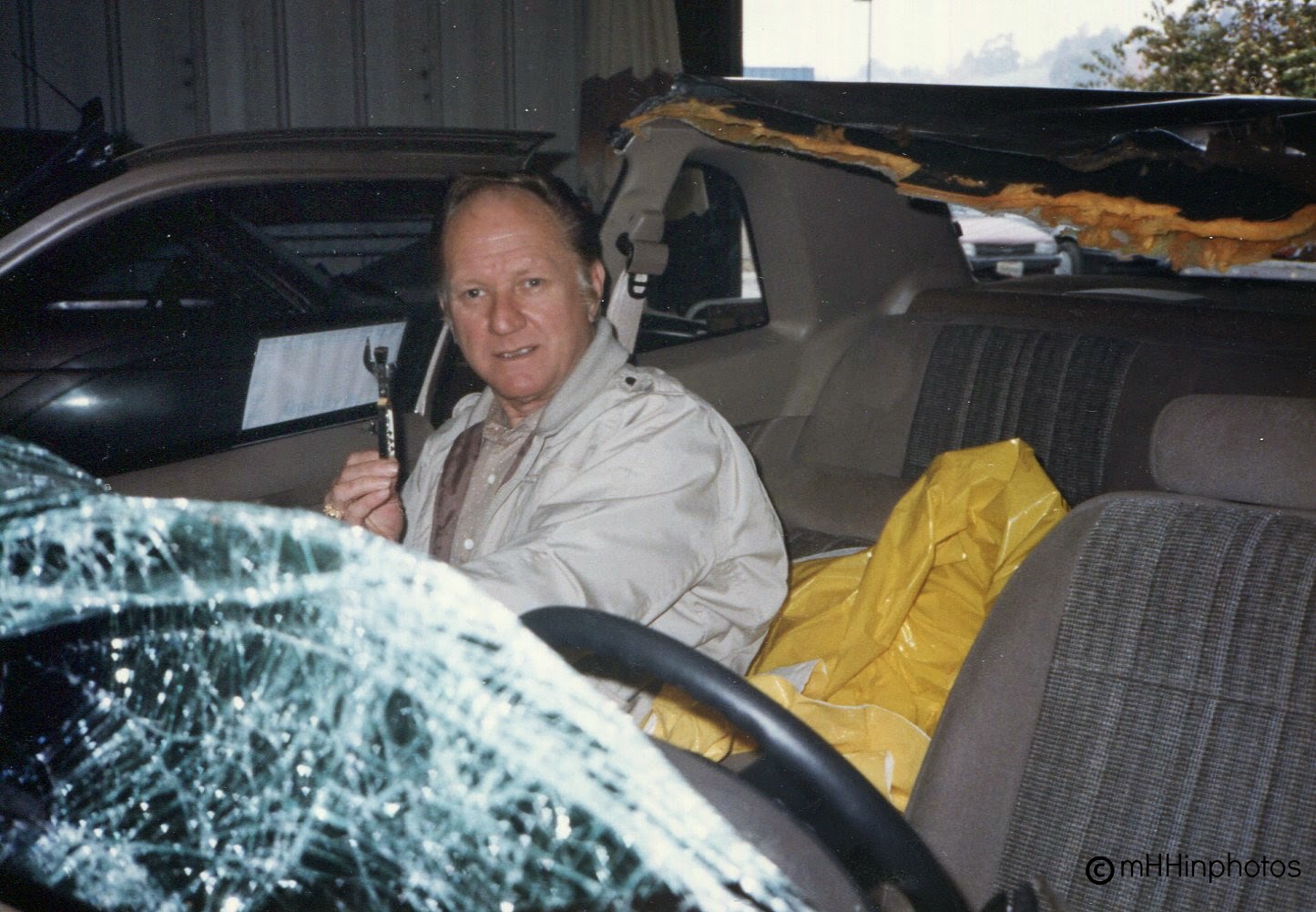 ***Dad checking out the vehicle he was trapped in. He brought a can opener from home which he is holding. Typical Dad, he was sharing the can opener as if it was what was used to get him out of the car. Still a sense of humor…they really used the Jaws of Life.

Cars Forklift T-Bird The Book of Me Transportation Wreck