So…What Did I Get In The Mail?

April 21, 2014
A couple of weeks ago I posted the photo below on a Wordless Wednesday post, asking if anyone knew what this may be. The best response I received was "a dead marshmallow" from Randy Seaver. That however was a wrong guess, are you surprised? 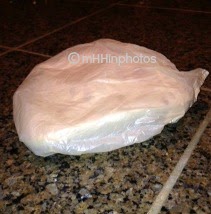 I have been communicating with a Westby cousin, actually my second cousin once removed, who lives in Washington. We have been communicating for approximately a year. I have learned a lot from him in regards to our common family line. I have asked so many questions, I was afraid he would stop writing with me. Thankfully, that hasn't happened...yet, anyway. He is a wonderful cousin who I believe really enjoys talking about and sharing what he knows about the family. I am so very lucky to have several cousins who are so willing to share with me.

Recently he asked if I had ever tasted Lefse (Lef-sa, it is sometimes spelled Lefsa), to which I replied definitely not. He told me he would be delighted to send me some, in fact his exact words were:

"I consider it my ancestral responsibility to enlighten my poor CA cousin who has never tasted this ethnic (Norwegian) staple from her distant past!! I'm sure you'll agree afterward that this experience is life-changing."

I love what he wrote! I love even more that he felt that way! 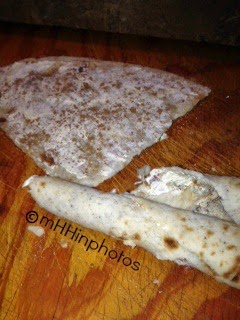 Lefse is what I received in the mail! My cousin has certain days scheduled when he helps makes this with some other folks. He explained how it would arrive and what I was to do with it. The lefse would arrive folded in quarters. I was to open up a round and cut it into 4 quarters. When the rounds were opened up, they reminded me of large flour tortillas. Traditionally, you would butter a quarter of the lefse, then add and sugar, according to my cousin. Or, you could add cinnamon and roll them up like a cigar, similar to the photo above.

I love cinnamon, so for me it tasted pretty darn good. My husband is not a cinnamon fan, so we decided to try another suggestion my cousin made, good old peanut butter and jelly. My husband liked this much better and I enjoyed it also. Eating them this way made it feel like the lefse was more of a crepe. 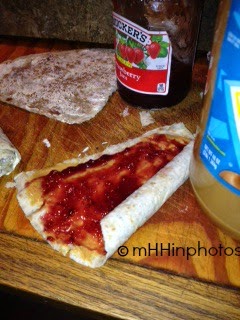 While I was eating this I thought of something I wanted to try. You can roll up tuna or chicken or just about anything your heart desires in these little treasures.

This being a Norwegian recipe/food, suddenly strayed my thoughts to my Swedish ancestry, wondering if I had ever tasted anything like this when we were there, but no, I hadn't. Then I remembered the five girls who came and stayed with us from Sweden. They brought us a jar of Swedish jelly. Ok...I HAD to put the Norwegian food with the Swedish food… 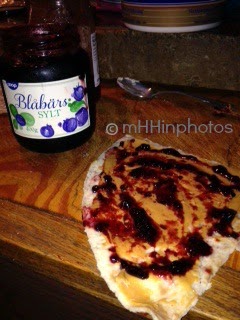 I have to admit, I think this was my favorite. I am not sure if that was because I loved the tastes together, or the idea that I was combining the foods from three countries of my heritage. I immediately felt closer to each of my family lines. 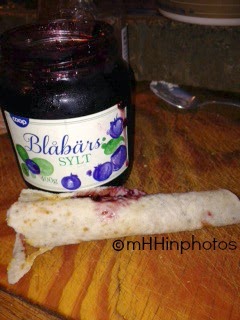 It was wonderful to have plenty of lefse to play with. I wish I had played around with a couple other ideas, like smoked salmon or thin slices of meat. I wanted my daughter and her family to taste it, but it just so happened they were away on vacation. Because it was mailed to me frozen, I wasn't able to re-freeze it.

Oh, did I tell you what the main ingredient in lefse is? Do you have a guess? No fair if you are Scandinavian and already know the answer. It is potatoes!

It would have been interesting to see if the grandkids liked lefse, neither of them really like potatoes. Neither of them eat french fries. My grandson may eat one or two…but that is about it. What kid doesn't like french fries?

Now, a special message to my Washington cousin...

"Dear cousin, I want you to know that this was most definitely a life changing event! I "ate up" (pun intended) every bit I could of my Norwegian heritage with these. Without you, this would have never happened! It was the first Norwegian food I have ever tasted! I now feel (as well as my tummy) closer to my Norwegian heritage! I have now eaten lefse and I thank you!"