June 17, 2011
This year with the new SCGS'S Jamboree's Extension Series, Jamboree's  App, and Paula Hinkle from SCGS being featured on Thomas Mac Entee's BlogTalkRadio show, it would have been amazing if one was not aware of Jamboree 2011! Jamboree still came so fast for me, as all of a sudden, there I was, driving to Burbank! I missed the growing excitement that comes with the anticipation of attending this conference. It didn't take long for the excitement to build though as I hit the road. About an hour into my drive I pulled off the freeway to pick up Angela who blogs at Leaves of Heritage Genealogy. This was her first time attending Jamboree which meant we had a LOT to talk about. Before we knew it we were in Burbank! 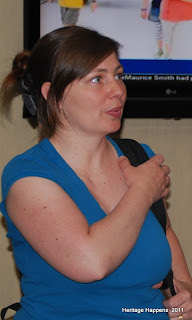 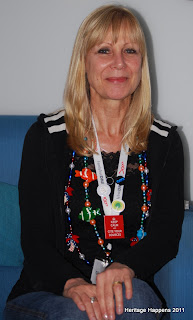 Immediately after checking in we hooked up with Gini (as well as her husband and granddaughter) from Ginisology. Soon we ran into Elyse from Elyse's Genealogy, who was volunteering to help at the Kid Camp. Next thing I knew, there was Terri O'Connell from Finding Our Ancestors. Terri and I are distant cousins through our Richmond lines. It was great to finally meet her along with all of the other genealogy bloggers I hadn't yet met. Just as much fun, was seeing all of the Genea-Bloggers I had met previously at earlier Jamborees such as, A.C. Ivory-Find My Ancestor, Randy Seaver-Genea-Musings, footnote Maven-Shades-The Magazine, Sheri Fenley-The Educated Genealogist, and many more. There were almost 70 bloggers in attendance this year. I will try to name as many of these bloggers as I can throughout my series of Jamboree posts. 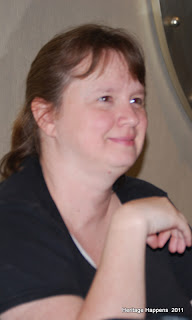 Terri ~ Finding our Ancestors
As dinner time approached a group of us went to eat. Upon returning from dinner, we went through "early bird check in" which was open from 6pm-9pm Thursday evening. We received our name badges, holders and lanyards. We also received a printed syllabus and/or a CD version also. There was a pen, various tickets (for raffles and special events), a Surname Wall brochure with labels along with other forms, goodies and printed materials. SCGS had a party to stuff bags for Jamboree a few days before it started.
Even though it is early on with my posts regarding Jamboree, I want to thank Paula Hinkle, Leo Meyers and ALL of the volunteers who helped with Jamboree! You were awesome and I know Jamboree would never have happened if it wasn't for all of you!
Thank you! Thank you! Thank you!