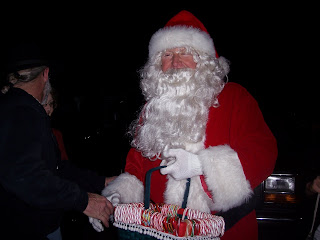 [Reprinted ~ Advent Calendar Day 6  ~  Santa from Dec. 2009]
Did I ever send a letter to Santa Claus?
This year I need to remember that Santa doesn't come to fill the stockings until Christmas Eve. The prince (my grandson) has his eye on the stockings! He knows each and every stocking and who they belong to. He also knows there is going to be one more added very soon, which by the way will have a Santa on it, for a total of seven stockings in my house.
Christmas is for the children. Santa has already given me my Christmas present for years to come, he has given two wonderful, happy and healthy grandchildren. Having the grandchildren, makes me even more excited about being Santa this year!
We will be taking my grandchildren to see "Harley Santa" at my Harley Meeting in a couple of weeks. He actually rides up on a Harley pulling a trailer with a Christmas Tree, the trailer full of presents and candy canes for the children. Mrs. Harley Claus is there to help also. Last year my grandson's turn came to sit on Santa's lap and when he got there he turned his head away from Santa. This year he is three "a big boy now" as he says, we shall see how he acts now!
Even though I haven't finished my decorating yet inside the house (I have had my grandchildren all week) my nephew (9) decided to count all the Santas in my house yesterday. If I remember correctly he came up with 28. What timing! Why did he decide to count my Santas? Does he have ESP or something? I know! Santa made him do it!