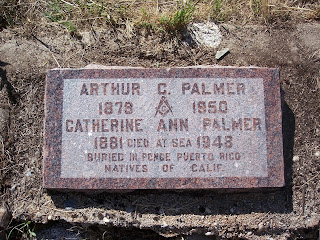 This headstone is in the Downieville Cemetery in Downieville, California. The monument is for Arthur C Palmer and Catherine Ann Palmer. Arthur C Palmer was born December 25, 1878 in San Francisco Co. California. He passed away on April 24, 1950 in Alameda Co. California.
Catherine Ann Palmer was born Catherine Ann Pizzotti on February 12, 1881 in Gilroy, California. She died at sea and is buried in Ponce, Puerto Rico. I do not know the circumstances of her death or where she was headed or coming home from.
I have a copy of "Family Facts" handwritten by Catherine dated February 12, 1881. I received a copy from one of her sons back in 2001. Her handwriting was so fancy, it was difficult to read and transcribe the several pages I was given. A few words I haven't figured out yet. The son was the only descendant living when he asked me if I could decipher the papers. Sadly, he passed away before I was able to give him the transcription. I asked him at one point if he wanted what I had accomplished at that point and he said he didn't want it until it was complete. As I feared, he passed all to soon.
Thanks for stopping by!
Wishing you success in all of your genealogical treasure hunts!
California Family Palmer Pizzotti Tombstone Tuesday