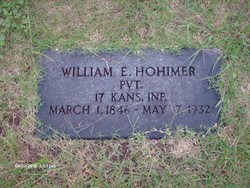 William E. Hohimer was born March 1, 1846 in Benton Missouri. He passed away May 7, 1932. He is buried in Lawson Cemetery, in Yale, Payne, Oklahoma. This is my second great grandfather.
Supposedly, the name Hohimer is altered from the German name Hochheim. My research doesn't go back to the name variations yet but then it hasn't gone back to Germany yet either.
William was married twice. His first marriage was to Margaret Catherine Woodward. Together they had seven children. Margaret and three of their children died of typhoid fever. Margaret passed away in 1879. William then married Louvina Shouse with whom he had one more child. My line follows the children of William and Margaret.
William had a fairly long life having lived until he the age of 86. He was a private in the 17th Kansas Infantry and received a pension . Watch for more about William!
Thanks for stopping by!
Wishing you success in all of your genealogical treasure hunts!
Benton Hohimer Kansas Lawson Cemetery Missouri Oklahoma Payne Tombstone Tuesday Yale