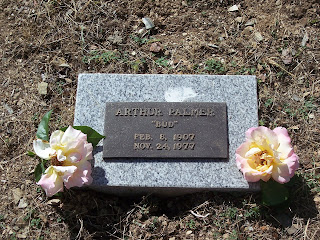 For several years my husband and I would go where this headstone was eventually placed. We went to visit all family members buried here. Most of those years we went, this headstone was not here. There wasn't a marker nor headstone of any kind for my father in law. These visits were during a time prior my becoming obsessed with genealogy. Every time we went to this site we would leave saying that next time we would have a headstone to place there. The next time came and we would say the same thing, over and over.

It finally bothered me so much that there wasn't a headstone for him, that I took it upon myself to have one made. I surprised my husband one year and gave it to him for Christmas. Something we always talked about doing.

I assumed many reasons why a headstone was never made. Could it have been that there wasn't the money? Was it not that important? Maybe feelings were that it was not a necessity? On and on my mind would go...

The gift was given and we went and placed the headstone. I was very happy it was finally taken care of. But was my husband? I know he was surprised and pleased this was finally done for his father. A certain instance and circumstance occurred which helped me figure out why this had probably never been taken care of, I can totally understand. I don't think I would have ever figured it out on my own. Unfortunately, I am unable to share this bit of information with you, but I am VERY happy I took care of this.