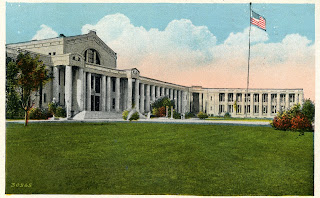 This is a scan of a postcard. I found it on E-bay a couple of years ago. I was searching for something, or maybe nothing, when I ran across this item. I knew I would be bidding.

The postcard is of Oakland Technical High School, commonly known as Oakland Tech, Tech High, or just plain Tech. This is the school my parents went to and graduated from in the early 1950's.

I am fortunate to have a photo of the high school they attended. I know many people may not have the opportunity to take a picture of their parents high school, it may not be standing any longer.

This school was built in 1914. In the seventies many schools were being torn down and rebuilt in order to make them earthquake safe. Tech's main building was deemed "to historical" to be torn down. Instead, the inside of the building was demolished and rebuilt, leaving the historic outside of the building in place. Oakland officially named the school a historic landmark on July 23, 1985.

Tech was featured in two major motion pictures. "The Principal," (1987) which starred James Belushi and Lou Gossett Jr. and "Made in America" (1993) with Will Smith, Ted Danson and Whoppi Goldberg.

There is a story my sisters and I have been told about how my parents met: "They met while my mother was going up the down staircase" at this school.

Alumni that you may have heard of who have attended this high school are:

Oh, but before I forget, the most important people who attended this school are: My parents! Without them I wouldn't be here!