June 30, 2009
I haven't informed you of the classes I took on Friday and I would like to do that now! Did you know there were over 100 classes offered at Jamboree?

Friday morning only, there were a few "Pre-Jamboree" Sessions which ran from nine until noon. I chose a session titled "Introduction to Genealogy-Advanced Beginners." Parmenter was the instructor. I thought this class was geared to intermediate genealogy, but I found it to be more for beginners.

After registration, which started at noon, it was time to see some of the bloggers floating around and a chance to mingle before the classes officially started. 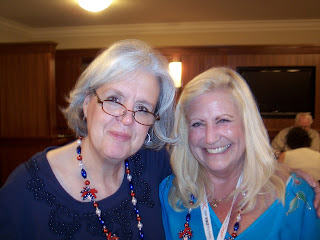 On Friday, I took DearMyrtle's "Finding Digital Items in the Family History Library Catolog." It was very informative, and I especially liked the fact that DearMyrtle presented it and I was able to listen to her speak! I haven't had much success with Family History Library as of yet, but I am hoping a few new things I learned from Myrt will help me with at least one of my lines. I was honored to have a picture taken with DearMyrtle the following evening, and spent some time speaking with her then. She posted to her blog an e-mail and picture I had sent her a few years back, before I ever even thought of starting a blog! The picture of me was when I was a baby and I wanted DearMyrtle to see who I am now! It was a nice visit! I even thought my husband may have known her fiance's brother, as he lived in the town we lived in, and they both played softball, and were both pitchers. But I asked my husband and it isn't clicking, maybe the brother played in another town or league. I was almost disappointed.

The second class I attended that day was a class given by Wendy Debout Elliott titled, "Buried Treasure-Lost in Print." I felt bad for Wendy when she realized she brought the wrong information to place on the screen for this class. So no pictures through this class (I like visuals, but that was ok) but she kept us engaged! She spoke of old writing and how the letters were and can be mistaken for other letters of the alphabet. Many, many examples.

The final class I took on Friday was a class given by Leland Meitzler, "Finding your Family in American Newspapers and Periodicals." Leland sure has a great time presenting his class! One thing I really liked, he projected himself so there was no way anyone couldn't have heard him. He was interesting in that he shared some personal information and gave us many ideas to think about when researching family using newspapers and such. 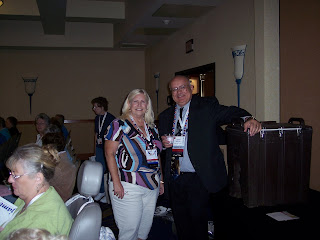 Again, I must say thank you again to Denise Levenick and Thomas MacEntee for putting together the goody bags for the geneabloggers! On Friday it seemed there was so much to do, it was a great thing to have some snacks to get by on as I never had breakfast or lunch! Such a wonderful idea, and saved my day!