A Light That Still Shines!

March 02, 2009
How much have you reminisced about the lighting your decendants used? I have to admit that this hasn't been one of my priorities in my genealogical research, until now. Last week I was finally able to view the world's longest burning lightbulb! I will share some pictures of it with you, but first let's review a bit of history involving lighting our ancestors used.

Candles made by beeswax were used by the Egyptians as early as 3000 BC. Oil lamps were used in the eighteenth century with the glass chimney or kerosene model lamps being developed in 1783. In 1792 William Murdock used the first commerical gas lighting in his house. A "thermolamp" was patented in 1799, using gas distilled from wood. In 1804 coal gas lighting was patented by Freidrich Winzor (Winsor). David Melville received the first U.S. gas light patent in 1810. By the early nineteenth century most United States and European streets were gas lit. At the turn of the nineteenth century gas lighting was replaced in most homes by electrical lighting. Thomas Alva Edison invented the light bulb in 1879. You can read more about these inventions here, and the inventors here.

The world's longest burning light bulb is located at the Livermore Pleasanton Fire Station, Station 6, at 4550 East Avenue in Livermore, California. This light bulb was originally donated to the fire department in 1901 by William Bernal, the owner of the Livermore Power and Light Company. It was first installed at the fire department hose house on L Street but was moved to the main firehouse on second street very shortly after. The new fire station in 1903 on First Street and McLeod was the next home for this light bulb. A police and fire truck escort moved this bulb in 1976 to it's present site. This approximate four watt bulb has served it's existence solely in Livermore, California. 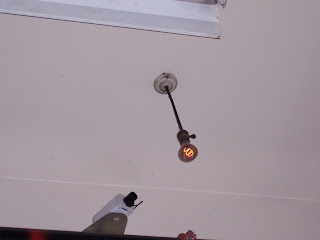 The bulb currently hangs high above, where it can't be damaged, sharing space with the fire engines. I visited the firehouse and took these pictures on Friday, February 27th, 2009. if you notice, there is a webcam on the lightbulb 24/7. 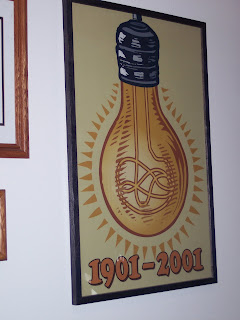 There are many awards and plaques hanging below the bulb. This is a centennial poster showing the bulb's 100 year anniversary of being lit. 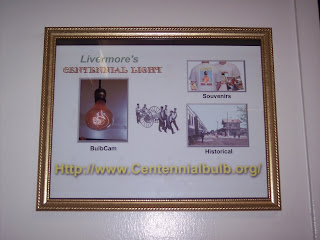 The lightbulb has it's own website here. The web cam you saw in the first picture is connected to the web so you can see this bulb shining bright here. 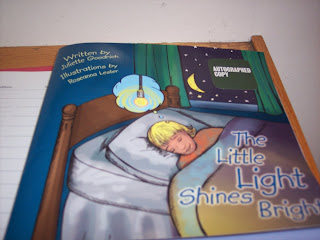 A true story children's book has been written about the light bulb, "The Little Light Shines Bright" by Juliette Goodrich. I will need to buy this for my grandson! 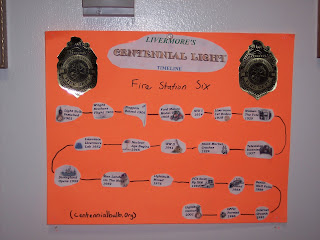 This poster gives a timeline of the life of this lightbulb. 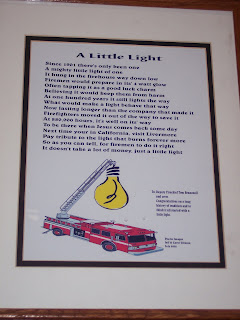 A poem and congratulations to the fire chief. 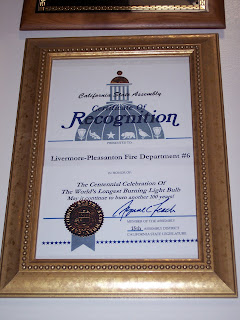 There are many awards such as the above posted on the wall below the bulb.
I signed the guest book at the fire station and took many pictures of the plaques. You too can sign a guestbook at the online site.
The home page of the lightbulb can been found here, enjoy reading more!
I wonder how long this bulb will stay lit? Plans for the bulb if and when it goes out is uncertain, although Ripley's has asked to have it for their museum. The bulb has been declared the oldest known working light bulb by Guinness Book of World Records and also by Ripley's Believe-It-Or-Not in 1972.
This bulb has been burning for 108 years and counting!
Oh, what changes lighting has gone through, and to think one light bulb has been burning longer than most people live!
Thanks for stopping by!
Wishing you success in all of your genealogical treasure hunts!
Msteri