November 28, 2008
As promised I wanted to show off my new paint job on my baby, the Harley. I received the bike back with the new paint, seat, motor and diamond cuts about two weeks ago. Spent a good five hours the following day spit shining. I enjoy cleaning the bike, I tend to be meticulous and love seeing the shine when I am finished. I waited for a day when the sun was out a bit to take a few pictures, however the pictures do not do justice to the bike. Without the sun actually beating on the paint and getting a close up shot, it is difficult to really see what it does. Anyway, here is an all around shot. 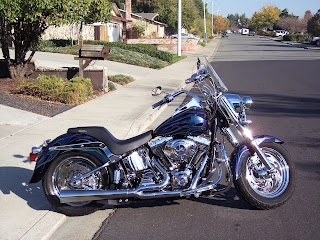 The paint looks so subtle, but you can see the chrome fairly well. The new seat is slicker and flows with the bike. My rims I bought a few years ago, and after the spit shining, they were shining nicely. 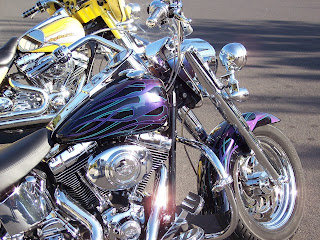 Here is a close up where you can see the color a bit and the style of the paint. The basic colors are purple and green, however the colored paint is cameleon paint, which changes colors in the sun. When the light shines on it, you will see blue, copper, purple, green, and variations of each.

Rather difficult maybe to see in the picture also is the fact that I had my heads what they call "Diamond Cut". This is something I have admired for five or six years and always admired.
When the heads were shipped back my mechanic told me, "Wait until you see these! You won't want them on the bike, you will want to wear them on your arms!" Bling! Bling! They sparkle!
The heads were sent to southern California to "Diamond Heads" to be given the "Show Cut." The tank and fenders were sent to Arizona to Mike Love's "Custom Paint" to be painted and pin stripped. Both did a fantastic job! 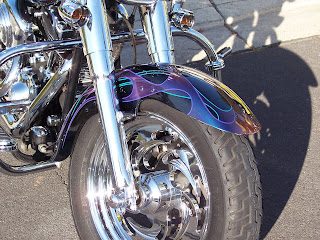 Here is a closer shot of the paint job, and actually my custom rims too! Today, kinda last minute, we decided to take my bike to Faultline Harley Davidson in Fremont to a ride in bike show. What the heck, put it in the bike show just for fun. They had three groups that the bikes were classified in. There was the Touring, Softail, and Unlimited groups. My bike is a Fat Boy Softail (2003 anniversary model) so that was the group it was entered into. The customers and people who came to the show were the ones who voted on the bikes.
A few hours later the owner of the Faultline Harley came out into the middle of the parking lot to announce the winners. Low and behold, I won first place in the Softail Division! I was stunned and thrilled at the same time. I won a $150.00 gift certificate from the dealership. For a last minute decision and a bit of a brisky ride over there, I was sure happy I entered the bike! What a great day and great ride!
Thanks for stopping by!
Wishing you success in all of your genealogical treasure hunts!
Msteri