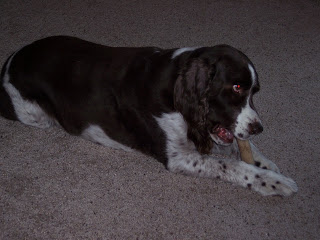 Dogs have been members of people's families for years. For some, dogs may be the "only children" they have ever had. For others, a dog may be their "main" companion. And still for others, some dogs are guides. But most dogs are pets and with this being Dog's Rule Day, let me introduce you to our "son," Riley, also affectionately called "Moose," a nickname my husband gave him.
Riley joined our family almost 10 years ago. He is an English Springer Spaniel. We bought him from a breeder, he was the "misfit" of the litter. The white stripe down the front of his nose goes off to the side and not straight like a well bred dog's stripe should be. But we didn't care, his crooked stripe actually added character! After all, we never planned on showing our dog, we just knew we wanted a Springer Spaniel. Wouldn't you know I took the strongest liking to the "misfit"?
I should have realized what we were getting into with this dog when I first saw him playing so rambunctiously. He is the most hyper dog I think I have ever owned. I call him the dog that bounces off my walls. So high strung, I was sure he would have a heart attack someday.
When he was young, he was tough to keep up with. Don't open the front door, or you will be in the car chasing him down, he was so dang fast! The Obedience Trainer gave up on him because he wouldn't sit still for 2 seconds. I almost hated for the doorbell to ring, Riley was sure whomever was there came just to see him. He would get so excited and jump on anyone that came through the door. We would wait to see if his tail was going to fall off, he would shake it so crazily.
Riley has mellowed, but it was a long time until he mellowed. He has always been a great people dog, except when it comes to the Veterinarian! There have been a couple of them that refused to even get close to him. It is the only time Riley has ever growled, and it has been at the Doctors.
Luckily one of my daughters is a Veterinary Technician and she has a "mother, son" relationship with Riley. Through her he has been extremely well taken care of. I have always said that her three dogs and my dog have been better taken care of than a lot of peoples children.
Riley is spoiled, he has to sleep next to me, in my bed. He has special times when he gets treats, but somehow he manages to work more of those treats in. He has his own chair in the family room, two beds (but still chooses to sleep with me at night) and gets toys you know he will chew up in 30 seconds. He has always had the run of the house and can come and go outside as he pleases.
"The Moose" loves the park. He will run and run and run and run and run...I would literally have to drag him away to take him home, or he would run until he died. He never knows when enough is enough. He also gets vacations! Yes, he goes to my daughters house when we are away, and he socializes with her menagerie of 3 large dogs and 4 cats. We tend to be gone several times a year so he gets many vacations, at least he is always happy to come home!
Riley gives so much back to us all. He has a clock inside of him that says "mommy is coming home" and will be waiting for the garage door to open and for me to walk in. My husband says he actually senses the time and will go wait for me. He loves lots of love, hugs, play time, and scratches. We have many great memories and plan to spend extra time with him on "Dog's Rule Day."
As I am writing this "The Moose" is in his chair snoring away in deep slumber. Soon, as I turn out the lights, he will be at the steps waiting for me to go upstairs to bed. Eat, sleep, play, look for some loving... oh, the life of Riley!
Thanks to Jasia at http://creativegene.blogspot.com/ (Creative Gene) for doing a round up of posts for "Dogs Rule Day" and Thomas MacEntee at http://destinationaustinfamily.blogspot.com/ (Destination: Austin Family) for bringing it to her and our attention.
Thanks for stopping by!
Wishing you success in all of your genealogical treasure hunts!
Msteri
Animals