Sentimental Sunday ~ The Roller Coaster of Emotions - Has it stopped on a High or a Low? 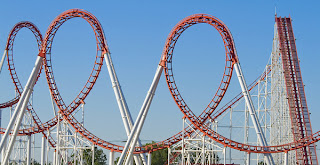 The past couple of months have been an emotional roller coaster for me. I hit some very low lows having dealt with three deaths in the family in such a short amount of time. I am reminded though that this wasn't the first time I have had this experience. During the years of 2008-2009 I also dealt with three deaths in the family in a fairly short amount of time, 10 months, 2 deaths actually occurring in the same month. This time the three deaths were in a two month period, and I lost my cat to boot. Unfortunately, there were other conditions that added much stress to my life during that time also that I am not about to go into. Let's just say every time I thought things were getting better, something else slapped me in the face.

Ok, this is not the point I am trying to make though, that we all deal with death and sometimes several in a short period of time. What was different for me this time is that when I was really down, something came along that made me want to do the genealogy happy dance! But that would be for a few minutes and then I remembered I was suppose to be very sad, and down I went again. I have never in all of my life gone through such different emotions in such a short amount of time, up down, up down.

Anyhow, I had a couple surprising, very exciting, up moments in the past two months also. One I would like to share with you now.

On September 20 at 9:37am, I received an e-mail comment for this blog. The comment was on a post I did in April 2009. It so happens that the post was "Blogging Prompt Post #12" that Amy Coffin devised for last year. Here is the prompt ~

"Use your blog to break down a brick wall. Posting may ring a bell with a reader. Maybe you will make a connection in five minutes. Maybe it will take two years. Either way, asking for help is the first step to knocking down that wall."

I wrote about my brick wall great grandmother in Sweden, Martä Lundberg. The comment I received about a month ago was from someone in Sweden who said they descended from Martä's brother and hope they could help me answer some of my questions! All GeneaBloggers know what it feels like when the Happy Dance comes around! I did it for a few minutes and then hurried to reply in case this person decided I took to long to reply or something. Maybe they were going away for a month and I wouldn't hear from them for a long time. I had to respond, quickly!

We ended up sending several emails back and forth that day, it was so exciting during such a trying time. This person is my third cousin once removed and his name is Janne Lundberg. He lives in Sweden and understands English and writes pretty well in English also! I am so fortunate! It was tough for me to have to let him know things were a bit rough for me at the time, but I did. We have written as we can, which has been wonderful and now I am trying to process most of the information he has sent me. I have a much clearer head now, so questions are being thrown at him left and right! I had to stop myself now because I am afraid I will scare him away!


I would like to say that Janne has been a super understanding and a wonderful friend and cousin for the short amount of time I have known him through our emails. I am not sure who is more excited, him or me? Then to have to be patiently waiting on me....I thank you for that Janne! When you are so excited, you want info right away, I know! I was given permission to share this picture of him ~ 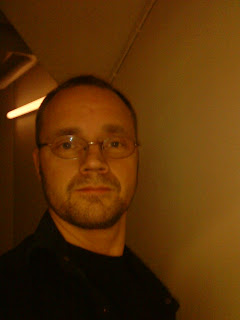 Thank you for the picture! I think I see some of those Lundberg traits! Janne has joined the Heritage Happens "Followers" group so I know he will be very valuable if I happen to state facts that may be wrong, and I know also that he may be able to fill in facts I am unaware of. I look forward to sharing new information regarding my Lundberg line with you, thanks to Janne!


This most definitely ends on a BIG HIGH and I can chalk up another one to social networking!


Thank you Amy Coffin for your blogging prompts! I hope there are many bloggers using them this year also, after all, look what happened to me! And Janne, my new English speaking Swedish cousin/friend, what can I say? Hugs to you, you are the best!!