The Book of Me Written by You ~ Prompt 7 ~ Maternal Grandparents

What were their names?
Where were they from?
Were they related? – Cousins perhaps
Where were they born, another Country or state/area
Photos
What did they do?
Did you know them?
What was your relationship with them?
If you didn't know them have you researched about them?

(I have decided to do separate posts for this prompt, otherwise the post would be so very long. There will be three posts on Grandparents.)

My maternal grandparents were Madie Jessie (Miner) ~ AKA ~ (Betty Sanchez) and George Clarence Milton Harding (Bob Harding). They were not immigrants, nor were they cousins.

Grandma was married four times that I am aware of, although I have been lead to believe there may have been a fifth time.

I personally knew two of her husbands, my grandfather and the only man I knew her to be married to, Reynold (Raymond-Ray) Felix Sanchez. They usually spent Christmas day with us. 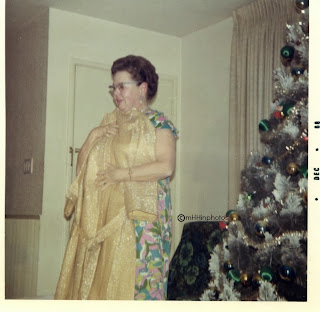 Besides my mom, my grandmother also had a son by her first marriage. My mother's brother was almost 12 years older than my mother.

Grandma was a beautiful woman when she was young. I know this from photos. I knew her of course when she was a little older and heavier. She worked in restaurants/bars when she worked. I have never known her to work. She is the relative I have the least information about.

We had a good relationship. When I was in my teens she became legally blind and I felt so sorry for her because she couldn’t drive anymore. I told her when I got my license I would take her anywhere she wanted to go. Unfortunately, that didn’t really happen much as I didn’t own a car until about the time I moved away from my home. My mother made sure to take her out shopping and to lunch at least once a week. There was a bus stop a house or two down from her home, so she also had close access to the bus, which was handy.

I used to go to the house and clean for grandma. There always seemed to be so much to do. It felt good to help her anyway I could. When I became a licensed cosmetologist, she became my client. Growing up I would venture to say that I probably saw this grandparent the most as she lived close to us. In fact, I walked about a mile to school (high school) and her house was along the way. Many times after school I would stop and visit her.

My grandfather was a real sweetheart. My memories consist of his constant smiling face and happy demeanor. He lived in another city but we saw him at least a couple times a month on average. Sometimes he and he wife came to our house to play cards with my parents. My sisters and I always looked forward to them coming over because he ALWAYS brought us candy. My grandfather was diabetic, and carried something sweet with him at all times, so he made sure we didn’t feel left out.

We spent many Easter’s and Christmas Eve’s with my grandfather and his wife at his house.  Grandpa played Santa and handed out the gifts. I loved all of my presents, and loved going to his house. There was always something to do there. They had a pogo stick, ping pong table, games and lots of coloring and paper things to do. They also had a fish pond in the back yard which I loved. 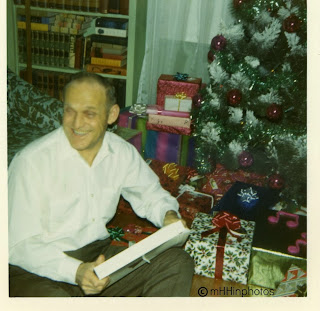 In his younger days he was a strong well-built man. My father would say he didn’t take any crap from anyone and he could hold his own. No one wanted to mess with him. I remember him as a thinner man who was the most easy-going, carefree, happiest person I think I have ever known.

I have done a bit of research on each of my grandparents. I went back to where my grandfather was born and grew up several years ago. I have more research to do in order to understand and learn more about their lives.