We booked our 12 day Baltic cruise on March 18th. Departure date was August 19th. Now that we knew where and when we were going on the cruise needed to, I wanted to contact some people to see if we could hook up with them while we were in different ports, etc.

The first contact I made was with some people we friended on our cruise in the Mediterranean on 2011, Dave and Cathy. Our first stop before our cruise was in London, well, Harwich actually, but close enough to London that we wanted to see if Dave and Cathy would like to do the cruise with us. They live in the outskirts of London. If they couldn't or didn't want to do the cruise with us we wanted to see them for a couple days anyway if it was possible. 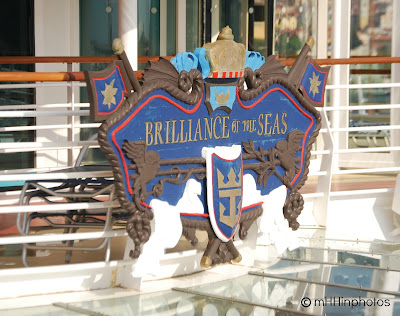 Maybe you will remember, this is the cruise ship we took on the Mediterranean Cruise,
and it will be the same ship we will take on our Baltic Cruise.

Dave and Cathy weren't able to go on the cruise with us, but were very favorable on hooking up! Our cruise left on a Monday, so we decided to leave the Friday before the cruise, on August 16th and fly straight to London.  We would have the weekend to spend with them, doing some sightseeing, enjoying a typical English Pub, and maybe even seeing a show. With this new information, we had a "leave" from home date, Friday August 16th it would be!

I also needed to set up the dates at the end of the cruise to meet my cousins. After all, this was what the trip was all about, in my eyes anyway. I emailed a bit of information about our plans and asked if the first week in September was ok for us to spend with them. They needed definite dates ASAP as they wanted to take time off from work.

For three years it has been discussed about when we could/should come to Sweden. I had the general idea of when would be best for everyone concerned for us to be there, and the first week in September worked perfectly for us. I chose a cruise based on the basic time period also. The weather would be good still, it wouldn't be time for snow or anything yet. Now I just needed to make sure the dates would work for everyone in Sweden.

That first week in September was good with my cousins. It was hard to believe dates were finally set! I stretched the three-four days my husband thought we would be there, to eight days leaving on the ninth.  After all, they were taking a whole week off, we HAD to stay at least that long! Still, I needed to figure out how to tell my husband this...remember, he doesn't do genealogy and doesn't really understand why I want to see distant cousins I have never met before.

This part of our trip, to meet with my cousins, was planned for us to be at the airport in Sundsvall on Friday, August 30th and be back at the airport to leave on Saturday, September 7th.

I still do not have a fly home date, and have a few "other" plans I need to work on. More on this next time!