Have you ever heard Rhonda R. McClure give a presentation? How about David Allen Lambert? If you live on the east coast you probably have. I, however, am on the west coast and this was the first time I have heard Rhonda R. McClure. I met David Allen Lambert five years ago (I didn't realize it had been that long ago, until David told me) when NEHGS did a seminar for the California State Genealogy Society in Oakland. As proof that it was 5 years ago, I went back five years and easily found this picture filed in my 2007 folder ~ 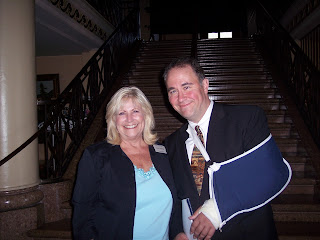 Barbara Poole gets full credit for this photo and for me meeting David Allen Lambert. She knows him personally and asked me to say hello to him when he was here in 2007. I caught her off guard and actually found time in my busy schedule to attend the event this year and Barbara again asked me to say hello to David. I caught him at the very beginning of the event and relayed her message.
I was sure he didn't remember who I was when I first approached him, but he didn't hesitate and said he remembered me. Well then, I naturally needed to have an updated picture with David! 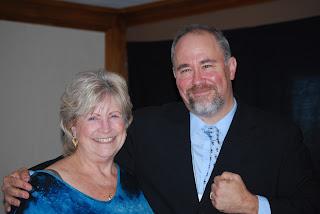 Both Rhonda R. McClure and David gave some wonderful presentations! I love getting new ideas and links and learning, don't you? I felt a bit uncomfortable for Rhonda when in the first class I attended, which was hers, an audience member openly argued with her about certain facts she was making. I am sure that threw her thoughts of her presentation off for bit. I couldn't image arguing with a speaker at a presentation. I don't even think I would approach a speaker afterwards with my thoughts, but that should have been the time to do it if there was a disagreement with information presented. Rhonda handled it all very professionally, and soon she was continuing with her presentation. I did take a photo entering one of Rhonda's classes, but unfortunately did not get a picture of Rhonda. 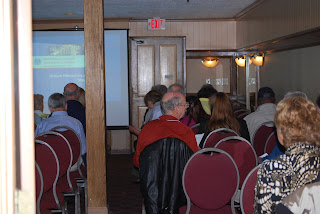 The last class of the day I took was David's. He was asked to talk about New England Military Records. That could have been a half day topic. David tried to cover as much as he could in the amount of time given and therefore went through some things quickly. Even so, it was time for the session to be over and he wasn't quite finished. Those of us that chose to stay were able to hear him finish his presentation, and that was most of us. He was told by the society that his class time had ended, but he continued on still and finished. Perseverance, wow! I was impressed!

I was impressed with both of the speakers for this event, and am happy I was able to hear Rhonda R. McClure present for the first time. I just hope it isn't another 5 years until we do it again!