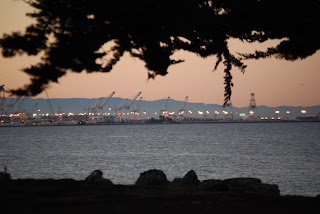 From Berkeley ~ Looking at the Port of Oakland
Taken by Cheryl Palmer on Friday, October 26, 2012.

The California Genealogical Society hosted "NEHGS Comes West" which was held a couple of days ago in Berkeley. A few weeks back Angela from "Leaves of Heritage" and I committed to attend together and we purchased our tickets. Thankfully, I committed when I did or I may not have attended. I never even found time to go over the sessions being offered, but Angela insisted she would go over them with me while I drove to the event.

As expected, Angela showed up at my house right on time and we headed off. My husband thought we would need 2 hours to get where we needed to go in Berkeley from my house. Commute traffic is horrible where I live, it has been known as the second L.A. traffic jam. It turned out we could not have had better luck, we got there in a half hour! Completely unheard of I say! We must have left early enough to miss the commute traffic or something because we sailed right along. Now we had an hour and a half to wait for the event to start, but that was cool, so much better than being late, and Angela and I can kill that time easily. We saw someone with a cup of Starbucks and decided to go find the store. 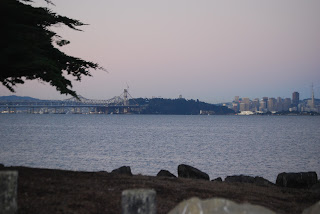 We drove up and down University Boulevard in Berkeley and never saw a Starbucks. We did however find a McDonalds and decided to stop there for our coffee. The upper class sure didn't hang out there. Along with "bags" outside the door and all over inside, the place was pretty scumy. We ordered our coffees and decided to drink them in the car. Anglea bought me a coffee for driving, so sweet of her. Thank you Angela! We got back in the car and realized our coffees were not what we ordered. Oh no! We both looked at each other and said we would "keep what we had" almost simultaneously. Neither of us wanted to go back inside. 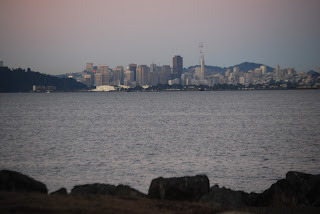 We visited in the car for an hour or so and headed back to Hs Lordships, the restaurant hosting the seminar we were going to attend. The restaurant is on the Berkeley Marina and the views that morning were beautiful. We got there about 7:00 a.m. and had plenty of time so I took a few pictures before we went looking for coffee. 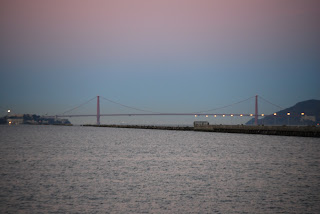