Showing posts from March, 2012
Show all

March 31, 2012
Joining in on Randy Seaver's fun while the grandchildren play! Randy says: Hey genea-census-holics... it'sSaturday Night, time for moreGenealogy Fun!! Your mission, should you decide to accept it (come on, you know that you want to!), is to:

1)  Pick one of the persons from your ancestry who should be in the 1940 United States Census.
2)  Using the column headings below (from 1940 United States Census Questions), predict what the entries will be in each column.
3)  Share your predictions on your own blog post, in a comment to this post, or in a Facebook status or a Google Plus post.
I chose my great grandfather Joseph Fleming and my answers will be in Blue. Some of these I don'teven have a good guess, but it was a fun little project!

The National Archives and Records Administration will open the 1940 U.S. Federal Census on April 2, 2012—the first time this collection will be made available to the public. Once we receive the census, we will begin uploading census images to our site so the public can browse them. Initially, this collection will be what we call a browse-only collection. This means a person can scroll through the pages of the census districts much like you would look at a microfilm or a book. At the same time, we will be working behind the scenes to create an index of the census that will eventually allow people to search for their family members by name as they currently can with all other censuses onAncestry.com. Note also that the 1940 U.S. Federal Census will be accessible free of charge throughout 2012 on Ancestry.com.

Can you believe it? A few short days and the 1940 Census will be released! Archives dot com, (who has been teamed up with the National Archives) will be hosting the 1940 Census. Archives dot com prepared this wonderful infographic which just may help you in finding those relatives you will be searching for when the Census is released on April 2nd. You can use this link for access to those records ~   1940 Census.archives.gov


Thanks for stopping by!
Wishing you success in all of your genealogical treasure hunts! 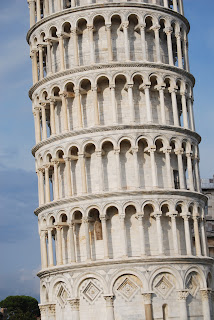 It is Sunday, September 18, 2011. We docked in Livorno, Italy about seven in the morning. The forecast was for a cloudy 80 degree day. We exited the ship and found there were vans parked at the dock, looking for cruisers who may need a ride. We spoke with a driver and found if eight people rented a van the price was very reasonable for the WHOLE day.
Since there were four of us already we only needed to find four more people. That didn't take long! As luck would have it there were four young ladies looking for a cab also. We had a lot of fun with these girls. I was impressed these young girls found the ways and means to enjoy a cruise such as this.
Leaning Tower of Pisa. Pisa, Italy. Photo taken September 18, 2011 by Cheryl Palmer.
Our first stop was to see the Leaning Tower of Pisa. Here is a close up, taken from the bottom of the tower.
Now, a close up of the top of the tower....
Leaning Tower of Pisa. Pisa, Italy. Photo taken September 18, 2011 by Cheryl Palmer.
Beautiful architect…
Post a Comment
Read more

March 20, 2012
Here is a link to a great article on how to prepare for the release of the1940 Census. The article is by Thomas MacEntee, so you know it is a great one! It is posted at Archives.com. Hopefully this will answer any last minute questions you may have.
http://www.archives.com/experts/macentee-thomas/1940-census.html
I am excited about indexing and looking for my parents and grandparents. (Even a few great grandparents) I have my list of "suspects" lined up, but do not have all of the ED's ready yet. I have told family and friends not to bother me on April 2, as I may not be very kind. I am ready to immerse myself with the index, even if I only index!
If you haven't looked up all of your ED's yet, you may not want to wait until April 2nd, as you know there will be many people who will. It may just overload Steve Morse's  One-Step Webpages site! I doubt it, but you never know, just be prepared! I am looking forward to Steve Morse speaking at our local society meeting…
Post a Comment
Read more

March 14, 2012
Have you tried it yet? It is simple, easy and fun! Try it, you'll like it!
Here are instructions from The 1940 US Census Community Project Teamthemselves!

If you haven’t already had a chance, you can download the indexing software and get started today.
…
3 comments
Read more

March 01, 2012
Unlike other censuses, the 1940 Federal Census will be available, free! Who doesn't like the word "free?" I know I do! Who will you be looking for in this census? I plan to look for my parents as this will be the first time they will be located in a census and of course beyond that, my grandparents, aunts, uncles, and well, you get it, EVERYONE that could possibly be listed!


Remember, until the census is indexed, you will need to find the enumeration districts of those people you intend to look for. Stephen P. Morse has this all set up for you on his website, One Step Webpages. He has a page where you can take a tutorial quiz to find out how to access this census when it becomes available. There is also a link on this page which will take you to the proper page to get the ED (enumeration district) numbers you will need. Don't be afraid to explore his site!


FamilySearch.org will be having "Intro to Indexing" Webinars this month. Actually, there will be an ongo…
12 comments
Read more
More posts