October 30, 2011
In Barcelona, Spain, on Friday, September 16, 2011, we boarded Royal Caribbean's Brilliance of the Seas for our twelve day cruise. All passengers needed to be on board by 4:00pm. We spent the afternoon getting used to the ship, waiting on luggage to arrive at our rooms and, of course, attending the mandatory
"Guest Assembly Drill."
I learned quickly that arrangements for dining had changed a bit since our last cruise. "My Time Dining" was a new feature. Instead of choosing a 6:00 or 8:00 dining time, you were allowed to pick your own time. We thought this was wonderful as we liked to eat more around 7:00, or whenever we wanted. This turned out to be a major learning process for us because we found out they wanted us to make reservations for a time each night, and not just show up when we wanted. It took a few nights until it was understood though and in the meantime we spent to much time in lines waiting to be seated. Most nights we had a table for two, but tables were so close you could visit with neighbors easily. The first night, dining was very casual, people would still be waiting for luggage to arrive at their rooms. 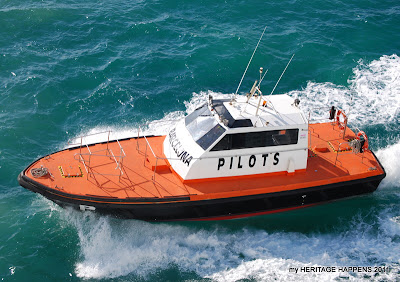 Barcelona, Spain. September 16, 2011. Digital Image taken by Cheryl Palmer.
The "drill" went much faster than most I have attended, which was a very pleasant surprise! We watched as we pulled away from Barcelona with the Pilot boat along side of us. I took many pictures of the port and the shipping docks. I have done this before on other trips. I enjoy comparing different shipping yards, my father worked on the docks for years. Here in Barcelona, cranes had been added just like they had been in Oakland, California. My father's working years did not include these cranes. This was a modern convenience added since his retirement, and most large shipping docks had them installed now. It is fun to compare the pictures I have taken from different ports and docks, having had a relationship with them most of my life. 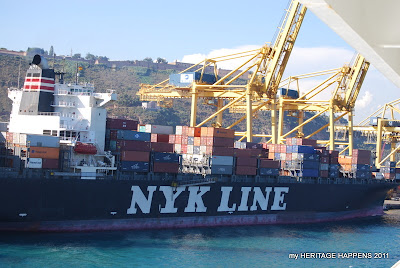 Barcelona, Spain. September 16, 2011. Digital Image taken by Cheryl Palmer.
This was one of the first photos I had taken of the shipyard, my father worked for NYK Lines at one time. 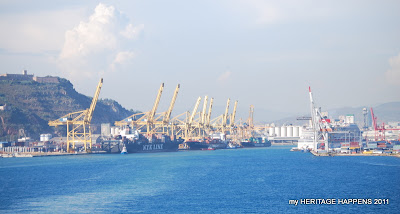 Barcelona, Spain. September 16, 2011. Digital Image taken by Cheryl Palmer.
To the left is the shipping port and to the right is Barcelona. 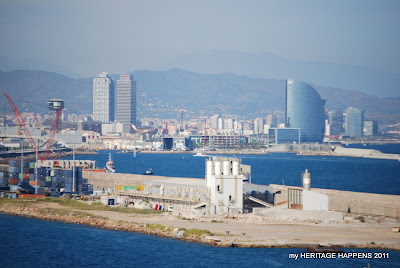 Barcelona, Spain. September 16, 2011. Digital Image taken by Cheryl Palmer.
A closer view of the city as we leave. 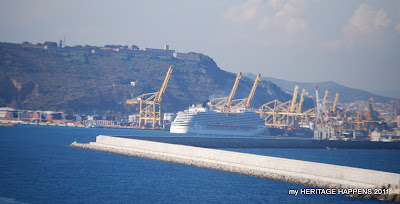 Barcelona, Spain. September 16, 2011. Digital Image taken by Cheryl Palmer.
The last picture of the docks that I am sharing today. Did you notice the cruise ship?

We explored and learned our way around the ship a bit, then went back to see if our luggage made it to our cabin yet. Two of three suitcases had arrived, wouldn't you know my main one was the one missing at this point? Not to get excited though, it did show up later, whew! 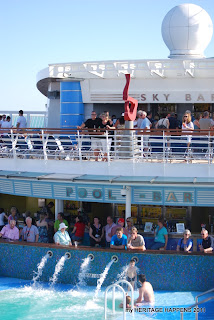 Royal Caribbean "Brillance of the Seas." September 16, 2011. Digital Image taken by Cheryl Palmer.
A view of two of the bars, one of which we got to know very well! In fact we got to know a couple of the people in this picture a bit later, and very well also!
We enjoyed a lovely dinner and made our way to bed rather early this evening. If you remember, we had been up for the equivalent of two days at this point. I was amazed, I actually still felt human, it must be the "knowing your on vacation" syndrome, right?

Our first port stop, was the following day, Villefranche, France.
Thanks for stopping by!
Wishing you success in all of your genealogical treasure hunts!
Copyright © 2011 By Cheryl Palmer All Rights Reserved
Barcelona Brillance of the Seas Cruise Docks Mediterranean My Time Dining Royal Caribbean Shipping