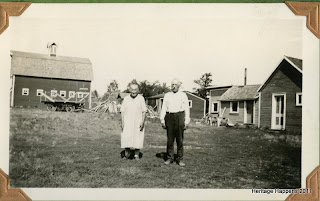 Last year I did a lot of scanning, as you may remember. I scanned a couple of photo albums which belonged to my grandmother, Thina. I fondly called the albums the "black album" and the "green album." This is one of the pictures from the "green album."

About March 18, 1891 Halvor came to America. His wife and their first four children followed Halvor to America about six months later, where the rest of twelve children were born. My grandmother, Thina, was the twelfth child. Eventually, Halvor and Kari became American citizens and migrated from Wisconsin to Minnesota where they stayed the rest of their lives.

For the "Those Places Thursday" theme, I chose to highlight this particular photo as it was taken at Halvor and Kari's last residence near Blue Grass, Wadena, Minnesota, before they passed away. Unfortunately, they both passed away before I was born. Halvor passed away October 7, 1942 while Kari passed away August 14, 1949.