This is the Face of Genealogy

June 05, 2011
I enjoyed a most wonderful, LONG weekend away with many great motorcycle friends. The weather wasn't the norm for June (will summer ever come?), so we all went to our destination in cages (cars). Even though we all belong to the same (motorcycle) chapter, a small group (8) also belongs to another motorcycle group. Yes, it has caused some tension, which it shouldn't, but that is the way the world turns. Personally, I don't have time for trivial issues, life is just to short! With that said, I stayed away from the "nay sayers" and had a wonderful time! I realized there was a "choice" I could make, I chose to be educated in the matter and to have a good time. Best decision I made!
Upon arriving home and checking my messages, I found I needed to make a reply to someone on Facebook. (I have been without phone/internet access since I have been gone) The moment I signed in I saw posts made from the genealogy community regarding an article by LAWeekly. I followed some of these posts to see what happened since I was out of contact. LAWeekly's article for this past Friday, Saturday and Sunday, was titled "The Face of Genealogy."  There was a very controversial picture that had been posted with LAWeekly's article, which also included the word "inbreeding". The genealogy community jumped on the band wagon and took a stand by sending comments to LAWeekly asking the photo be removed.  The bloggers then wrote blog posts sharing the "true faces" of genealogy, real ancestors photos. LA Weekly got the message as the original photo has since been removed and isn't even worth showing here, at least in my opinion.
I choose to support that of which I am educated and believe in. Being involved in the genealogy community as I am I feel I am pretty well educated on this matter. I am proud to see that genealogy bloggers responded so quickly to this issue, and rightly so. I wish to join in by sharing a true "Face of Genealogy" as Thomas McEntee proposed, in support of this wonderful community in which I belong. I will then submit my own letter to LAWeekly requesting an apology for the inappropriate picture that was posted. I do feel an apology is in order, to the Southern California Genealogical Society Jamboree and to everyone involved in genealogy. I am, again, educated enough on this matter and have chosen to follow up with that which is right. I happily share this photo with you and hope see an apology made my LAWeekly. 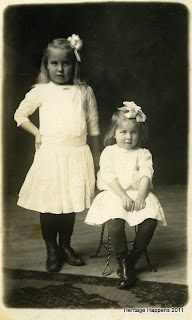 These faces of genealogy are my grand aunt Olga (Westby) Jordahl (May 30, 1907 ~ January 7, 1999) and her sister, my grandmother, Thinia (Westby) Lundberg (April 15, 1910 ~ July 24, 1988).
To see more "This is The Face of Genealogy" posts by GeneaBloggers click this link.
If you REALLY must see the photo posted by LAWeekly, you can see it here.
A fabulous letter was submitted to LAWeekly by an eleven year old budding genealogist, Emma. Emma is genealogy blogger and GeneaBloggers "May I" columnist Gini Webb's granddaughter. To sad that an eleven year old has already dealt with something like this in her young genealogy career.
Go Get 'Em Emma!
Now, not to be out done by Emma, it is my turn to submit a letter so I am off for now!

Thanks for stopping by!
Wishing you success in all of your genealogical treasure hunts!
Copyright © 2011 By Cheryl Palmer All Rights Reserved
Emma GeneaBloggers LAWeekly Motorcycles So Cal Jamboree The Face of Genealogy Thomas MacEntee Webb Westby