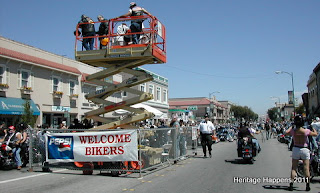 Fourth of July Weekend, Hollister, California, 2002. Cheryl Palmer [Address for private use] California. 2011
I am sure most of you have heard of Sturgis, the BIG motorcycle rally in South Dakota. There is also the Laughlin River Run, Laconia, and Reno's Street Vibrations among many, many others. But, have you ever heard of the Hollister Motorcycle Rally? Hollister was one of my all time favorite runs. For those who don't know, yes I ride a Harley Davidson. The last bike I bought was a brand new 100th anniversary Fat Boy. I shared a picture of it here.
Since I started riding in 1999, I think I have missed one Hollister event. Hollister is fairly close to my house so it isn't an event where I need to spend the night. Many people however did camp a night or two at nearby Bolado Park. I always enjoyed walking the main street checking out the bikes and all of the wild and crazy people. Of course, there were many booths to shop at also. Sonny Barger (the world's most famous Hell's Angel ~ founding member and president of the Oakland Hell's Angel Chapter) has had a booth or two at these rallies where he autographed and sold his books. I stood in line one year to receive my own Sonny Barger autographed book. I have a picture I took of him, somewhere...
In 1947 during the 4th of July holiday weekend there was a riot in Hollister where supposedly 4,000 bikers took over the small town. This event was called "The Gypsy Tour." There was fighting, racing and injuries. Over 50 people were arrested and three people died. The movie, "The Wild One" was inspired by this event. In 2005, the Hollister "Independence Day" event was said to have 100,000 people downtown. In 2006 the event was officially cancelled because of various issues in setting up the event. The largest crowd ever was in 2008 with over 130,000 people. 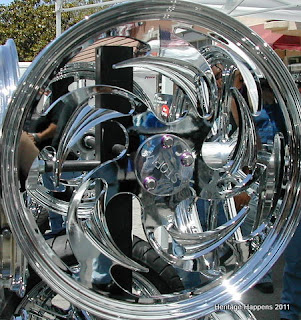 One of the biggest joys of attending the Hollister events was that I always seemed to find great bargains and items that I really liked. I collected Hollister ride pins each year that I attended the rally. The last couple of events I attended also brought new rims to my bike (which you see above and may have noticed on my bike if you checked out the link above) and a custom paint job that I shared in this post.
In 2009, the Hollister City Council voted to cancel the Hollister event, due to the costs the city may endure. The city was already struggling with a low general fund and in previous years lost money on the event. There are so many costs in running this event, law enforcement and the fire department costs alone must be an amazing amount of money. Even though the event was officially cancelled, bikes would still roar into town during the 4th of July weekend. There have been car/motorcycle shows and events, but nothing like the old time "official" rally where motorcycles parked up and down the main drag.
This was one of the first, if not the first, motorcycle rallies I attended and it truly has a place in my heart. I feel so fortunate that I ride and have been able to participate in Hollister's Motorcycle Rallies. Fifteen years ago, or more, I would have lost the bet made on me. I would  have said "I would never ever ride a motorcycle, let alone a Harley." Plus, who would have ever thought I would say,
"I miss the Hollister Fourth of July Motorcycle Rally!"
Thanks for stopping by!
Wishing you success in all of your genealogical treasure hunts!
Copyright © 2011 By Cheryl Palmer All Rights Reserved
Barger Harley Davidson Hell's Angel Hollister Independence Day Oakland Sturgis The Gypsy Tour