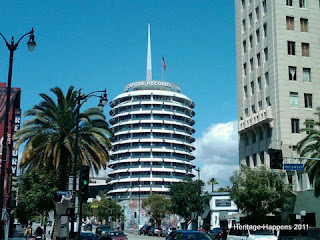 Capitol Records, as seen from the intersection of Hollywood and Vine. April 9, 2011
Must get back to interview day! Wasted to much time already on negatives! Thank you all for your support, I appreciate the positive feedback from everyone and especially those that took the time to write me personally. I have an amazing group of GeneaBlogger friends and family, and for that I am extremely grateful.
I believe I left off where I was about to be called in for my interview. The gal before me had since returned from her interview and was looking to leave to get back to the airport. I reminded her she needed to fill out the paperwork which she had forgotten about. A couple of the "interviewers" walked past us at this point and on out the main door, they had an agenda to keep. I asked this gal how she thought her interview went and she seemed very non committal, unsure. She seemed a bit sad or tired to me too. She was up early and had flown in from Washington, so she probably was very tired.
Before I knew it, I was being escorted to my interview. The room was a long one with many windows on the opposite wall, a long table was in the center, the room was bright and cheerful. Or maybe it was my mood was bright and cheerful, I am not sure which.  I was seated on the opposite side of the others.
In essence my personality was the main topic, along with my hobbies and the things that I do. I was asked to name some of the positives and negatives of my personality. The positives were easy, the negatives were tough. I don't think to often about myself, I am always thinking of others. I am not sure that I gave them a negative at this point, but I am sure they were checking out my actions and looks along with my personality.

One area they seemed very interested in was the fact that I own and ride a Harley Davidson. The director himself had on a black leather jacket and asked if I owned a leather jacket. I told him I owned a few along with other leather items. He commented that he didn't suppose I belonged to a motorcycle club, and I told him I actually belonged to two of them. I went into a bit of detail on this subject and the clubs that I belonged to. I never had the opportunity to ask if the director owned or rode motorcycles. I have wondered ever since.
It was very fast 45 minutes. The interview was over. The director and the other woman from the casting department  were leaving the room. The casting director explained she was going to film a little bit before I left. There were questions she wanted me to answer to the camera, which she would start and stop between questions. I would see a light on the camera when she was filming, but she also used hand motions as to when to start talking and when to stop. Here again, I was put to the test, I needed to answer those negatives about my personality. Through some conversation I eventually came up the perfect answer. I appreciate the casting director giving me some time to work on that answer! As I had told them all earlier, I am by far a perfect person, I definitely have my flaws, I just don't think about or dwell on them.
The casting director let me know that each person who was interviewed would be contacted by phone, whether they made it to the final 10 or not. She was hoping that we would receive the call by April 21st. If by chance they have a difficult time choosing between a couple of applicants there could be a phone interview with those two applicants only to help them make a decision.
For the most part, the interview was easy. Years ago, I would have been extremely nervous with red blotches all over my neck to prove how nervous I was. I used to be accused of having hickey's on my neck, when in actuality I just have very sensitive skin. Stress and nerves always showed up around my neck,  Distracting as it was, that was me and something I couldn't control. I am most grateful that now I rarely get this way, but that may be because I do not put myself in many circumstances that stress me anymore.
Next, I was given permission to go roam the town a bit, get lunch or do whatever I wished as there was a couple hours until they would return me to the airport. I thanked the casting director and walked to the front lobby. The director saw me from the kitchen area and asked if I was leaving. I explained I was going to get some lunch and would be back in awhile. He came over, shook my hand and said it was very nice to meet me. I was impressed that he took time to stop what he was doing to make a comment to me, and especially, that he walked over from another room and shook my hand! I shook his hand and thanked him. Then I realized there was a cute, blond haired guy on the couch finishing up some paperwork, ready for his interview, so I headed on out the door.
I walked a few feet away from the building and called my husband and my daughter to let them know my interview was over...complete...done...I did all I could do. Now, it was to be a waiting game. Of course, they each wanted to know what the interview was all about and how I thought it went.
I thought it went well, especially since I knew how bad it could have gone! I felt there were some very positive moments during this interview and of course the one point where I struggled regarding negatives about my personality. Which reminds me, during the interview they also inquired as to the kind of temper I had. I told them I really did not have much of a bad temper, I was pretty calm and even keel most of the time. I wasn't so sure that was the answer they wanted to hear though after I heard their next comments. I realized then that they were looking for "response and action" for TV purposes, and I totally understood that, so I quickly jumped in and shared an incident I went through just the day before at my grandson's preschool, which indeed proved I could get angry, frustrated and voice those reactions!
So, with all of the good and the bad, I, at this point, have done all I can do. Now I have been waiting and doing some wondering. I imagine the type of people they want for their TV show. I believe they would want a variety of men and women, young and old. I feel they want active, interesting people, maybe someone who has a compelling genealogy story or someone who is possibly aware of family they have in Sweden. Maybe someone you would least expect to have Swedish ancestry? Maybe people that would show definite interest in the specific challenges they were planning? Maybe people with attitude or those who can follow directions? Whatever they are looking for, they will be choosing their final ten...by whatever standards they have set.
Truthfully, when I walked out of the building from the interview, I was flying high! This has all been such a blast, I was extremely happy. I was one of the people who made the cuts through to the grand finale. I was able to experience this whole event! Who would ever have thought? Certainly not me!
Thanks for stopping by!