March 08, 2011
Recently I have been communicating with a new Westby cousin from Washington state. Today, I was looking at some of the information I already had on some of these relatives. One page, a copy of 12th Federal Census for the Westby's intrigued me. I have had a copy of this for some time now and was aware of some things on this paperwork, but not of others.

I was aware this particular 1900 census page lists three different Westby families. I haven't worked much with the Washington Westby's, so I hadn't really looked closer at this record until now. One of the Westby families listed is Ole T. Westby with his wife and children. Ole T. was my great grand uncle. I am aware there was an Ole T. and an Ole A. Westby which lived on the same road in Washington. Both of their families are listed on this census, along with an Erling Westby.

For now though, I am just looking at the Ole T. Westby family. His wife was Helena. There are seven children, two sons and five daughters, Torval, Olaf, Inger, Hilda, Olga, Eda, and Otina. Ole T., Helena, and Torval were all born in Norway. They immigrated to the United States in 1887. The rest of the children were born in the United States. Olaf was born in Minnesota while the other children were born in Washington, where this family finally settled. Ole T. was a farmer and owned his farm. He, Helena and Torval could read and write in English. Except for Helena, they could also speak English. This brings me to the interesting area of this census record. 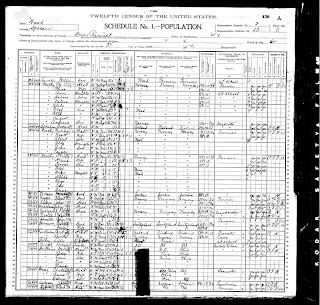 Each person in the family has their age listed ~

The strange part is that the only one listed with their full birth date is Ole T. The whole page has birth dates listed for everyone, except the rest of this family. Of course, I can roughly figure out the year each was born from this, but I find it odd that the months and years weren't listed for anyone else. Many of the others on the page were from Norway, Sweden, Finland and Germany. All months and dates for them were listed.

Although it is difficult to see here, below Ole T.'s birth information of, Mar 1861, the boxes for every other person has a check mark in it. In tiny writing length wise across the column is a message which reads:

"Could not secure ? ? "  The last word almost looks like "date" without an "e" but the second to last word surely doesn't say birth. I will have to try to look this record up again, maybe in another data base, where it could possibly be read.

I don't think Torval was old enough to supply the census information, so it was more than likely Ole T. who was the supplier. Why wouldn't/couldn't Ole T. give the actual dates of birth for these children? Could Torval possibly have been an interpreter for his mother? Maybe he didn't know how to pronounce the months? Could this information have been forgotten? I can't hardly believe this wasn't known. I am starting to grasp at straws here. Do you have any ideas? I would love to hear them if you do!

Oh and by the way, I am so glad the big black mark at the bottom of the census page wasn't blocking my families information!