February 25, 2011
My great grandparents were Halvor Torgelson Westby and Kari Halvorsdatter Sjøli, who are shown below ~ 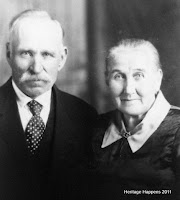 The 1920 Federal Census states this Westby family lived at house 100 and were family 101. "H" Westby is head of the house, 58 years old and a farmer. His wife,"Carrie" [sic] is 56 and does not have a trade or profession. The Westby's own their home and have a mortgage. Both were born in Norway as were each of their parents.

A single male, Emi (I believe this is Ingvald, it is the first time I have seen him being referred to as Emi) , is shown following "Jalmer" [sic]. Emi  is another farmer and is 17 years old. Clifford follows and is 15. He is not shown as having a trade. Olga, the first female to be listed after Kari, is 12 years of age, while Thina, who happens to be my grandmother and the last member living in this house, is 10. Everyone in the family is listed as white.

I transcribed this family record completely on May 13, 2007. I also transcribed and added the next person in  the census as I recognized the surname and knew this person was involved in my family history. (A prime example of paying close attention to everyone listed on the census pages!)

This last person I transcribed was E A Soderlund. His house number was 101 and he was family 102. By the way, I don't think I mentioned that the street these people lived on was listed as "farm." E A Soderlund owned his home, had a mortgage and was 51 years old. He and his parents were born in Sweden. He too was a farmer. The year of immigration shows as unknown, reading and writing he could do.

I had hoped to share the census transcription here, however technical difficulties have prevented that at this time. I hope I can share this in the near future.