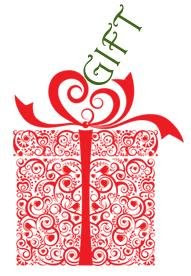 The most distant memories I have were those spent Christmas Eve with my grandparents and aunt and eventually her family. My grandpa Harding was the sweetest ever. He was always so happy and made us feel special and so very comfortable around him. He was the one who decorated the Christmas tree for many years, until they finally put it, decorations and all in a spare bedroom, covered with a sheet waiting for the following year. My grandfather played Santa and handed out the gifts. He truly enjoyed watching us open each gift as if he had gone out and bought it himself. I do believe though that my grandma did the shopping.She did the shopping, he wrapped.
Several years ago my aunt gave me a gift I treasure so much. This gift was given to me when I was first learning genealogy, about 10 years ago. At the time I was interested, but only because I found family information online by accident. I played a bit to try to find more information, which I did, but eventually I became to busy and didn't have a clue what to do next. I had no idea what to do with the new found information either, but I kept it. Because I was "involved" and excited over the information I found, my aunt gave me this gift.

It was a package of a "12 suzi powell fashion bows" with one of the bows missing. I thought this was a strange gift. What made it special said my aunt, was that my grandfather had written on the back. Oh, okay! Hum, still a little strange I thought. 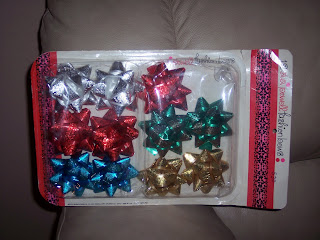 Fast forward to this day in time. I have pulled the package out and it is now in from of me. I just took a few pictures, actually these are the first pictures I have even taken of this package. The memories, my mind going back in time, just seeing this package now, makes my eyes well up with tears.
As for the back of the package (which was the important section) my recollection of what he had written was nil. Now, looking at it again for the first time in years, I find it is a list of what my grandparents bought for us for Christmas that year. Almost everything is crossed out. Those items crossed out seemed to be items grandpa had wrapped already.
This list shows I received a large yarn set, block puzzle, Tic Tac Toe, transistor phone, and a nightgown (which wasn't wrapped yet).
The next youngest sister (I am the eldest) received sports checkers, art fabric(not wrapped), a pants suit and nightgown (not wrapped).
My youngest sister shows she received a small yarn set, a button (?) puzzle(not wrapped), some kind of a pull game, and a nightgown (not wrapped).
My parents received a blanket.
My nephew a sleeper, turtleneck shirt, and coveralls.
My aunt and uncle received glasses and coasters.
This list had to be made in 1970 or 1971. We are looking at this as being about 38 or 39 years old now.
Now I get it! Back when this was given to me, I didn't "get it." Today is a whole different story. How I miss my grandparents and the times we shared on Christmas Eve and other Holidays.