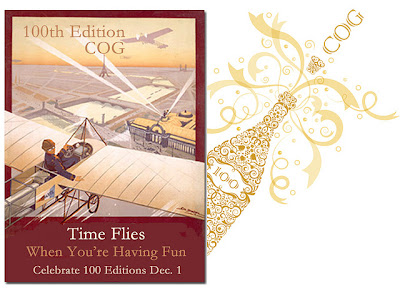 And the topic for the 100th edition of the Carnival of Genealogy is… “There’s one in every family!” Bring your stories of colorful characters, unique heirlooms, mouth-watering recipes, most dearly beloved pets, whatever! Interpret as you like. Every family has “special” individuals, you know, the ones with a green thumb, the black sheep, the lone wolf, the blue-ribbon cook, the story-teller, the geek! I know you have treasured recipes and amazing heirlooms you’ve yet to share! Tell us about them and become a part of history in the 100th edition of the Carnival of Genealogy! The deadline for submissions is December 1st.
(Jasia's full announcement for the 100th COG is listed below my post)

THERE IS ONE IN EVERY FAMILY...COG'S 100TH EDITION! THE "ONE" IN MY FAMILY

Who is the "one" in my family? My post is about a man who was born February 10, 1929 in Norway. This man is Hallgeir Brenden and happens to be my second cousin once removed. My second great grandparents, Halvor Jonson Sjøli and Kirsty Pedersdatter Bakken were Hallgeir's great grandparents. I chose Hallgeir because he is the most famous family member that I am aware of at this point and time in my research. I learned about Hallgeir last year via e-mail correspondence with a very special cousin from Montana.

Now you know who I chose, but why did I choose to post about this cousin? What makes Hallgeir the "one" in my family? Well, he was a Norwegian cross country skier from Tørberget in Trysil. 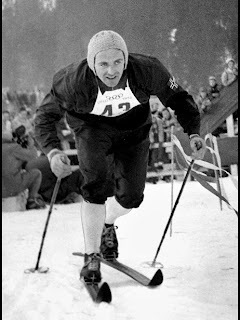 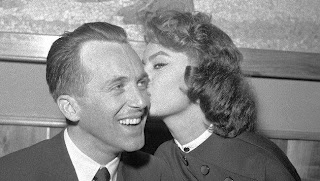 Hallgeir also won at the Holmenkollen Ski Festival in Norway three times. This festival is partly ski jumping, that is the event that he won in, ski jumping that is not the event he won in ~ he won as a cross country skier in the 18 km: in 1952 and  15 km: in 1956 and 1963, and, this is not all he won!

Hallgeir was the only one to win the Olympic, FIS Nordic World Ski Championships and Holmenkollen events at 18 km and 15 km. In 1955 he was  awarded another medal. This time he received the Holmenkollen medal.

This cousin of mine was apparently very athletic. In 1953 and 1954 he competed at the national level in athletics and won the 3000 metre Norwegian Steeplechase!

In 1952 he had also received the Egebergs Ærespris. This is a prize (a bronze statuette) that is awarded to Norwegian atheletes who excel in more than one sport.

In 1960 Hallgeir again won a silver medal at the winter Olympics in Squaw Valley. The picture below is of Hallgeir later in life photographed with his trophies. I still find it hard to believe this is a relative of mine! 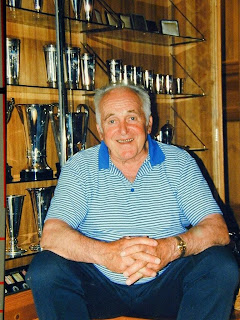 In Norway, a statue was placed in his honor. "OL-GULL" means "awards won". 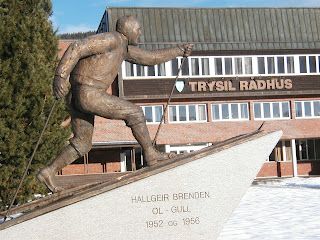 Hallgier passed away in September 2007. Even though I never knew him, I am proud to say he is a cousin!

I would like to congratulate Jasia from Creative Gene for the 5th Anniversary of her blog and the upcoming 100th Edition of the Carnival of Genealogy! Jasia is one of the major bloggers who has inspired many of the GeneaBloggers you see posting today, myself included. Jasia, congratulations to you on this wonderful event, your 100th COG! I am really pulling for your dream to come true! I apologize for being so late posting mine, life since summer has been very much in the way of my blogging, but I HAD to make SURE to do this post!

Time is closing in on the deadline of this special edition. If you haven't yet posted to this carnival, won't you please take a few minutes and help make Jasia's dream come true by writing a post,
"There's One in Every Family"?

Jasia's original 100th Edition announcement:
Call for Submissions! As I mentioned in a previous post, I am asking all who have participated in past editions of the COG to participate in the 100th edition. It’s a FAMILY REUNION! There will not be the usual cap of 30 submissions for this edition. Instead there will be a floor of 100! I will not attempt to write comments nor choose a featured author this time around. I’m asking all of you to help me out here and make my dream come true. I would like to have 100 or more submissions from my friends, my COG family members, for this 100th edition. It’s a tall order, yes. It hasn’t been done before and therein lies the challenge. Can it be done? Only your time and efforts will determine that. I know there are many more than 100 authors who have participated in the previous 99 editions of the COG. I need at least 100 of you to step up and write a blog post to submit to the COG to make my day, my week, my month, and my blogging career. I don’t know how many past participants are reading this edition so I’m hoping you’ll help me get the word out. Please share this info on FaceBook, Twitter, GeneaBloggers, Second Life, your own blogs, mainstream media, the 4 major TV networks, genealogy conferences, and wherever past COG participants may gather!

And the topic for the 100th edition of the Carnival of Genealogy is… “There’s one in every family!” Bring your stories of colorful characters, unique heirlooms, mouth-watering recipes, most dearly beloved pets, whatever! Interpret as you like. Every family has “special” individuals, you know, the ones with a green thumb, the black sheep, the lone wolf, the blue-ribbon cook, the story-teller, the geek! I know you have treasured recipes and amazing heirlooms you’ve yet to share! Tell us about them and become a part of history in the 100th edition of the Carnival of Genealogy! The deadline for submissions is December 1st.

Submit your blog article to the 100th edition of the Carnival of Genealogy using our carnival submission form. Please use a descriptive phrase in the title of any articles you plan to submit and/or write a brief description/introduction to your articles in the “comment” box of the blog carnival submission form. This will give readers an idea of what you’ve written about and hopefully interest them in clicking on your link. Past posts and future hosts can be found on our blog carnival index page.