November 22, 2010
Thank you to John Newmark from the TransylvanianDutch blog for supplying this Monday theme for us GeneaBloggers. Taken from John's blog, he posts this as the definition of Amanuensis:
Amanuensis: A person employed to write what another dictates or to copy what has been written by another.
I have chosen to transcribe this letter and an explanation of the picture which is posted below. The letter was written by my grandfather's cousin and the Hohimer farm was that of my 2nd great grandfather. 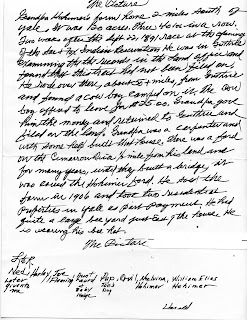 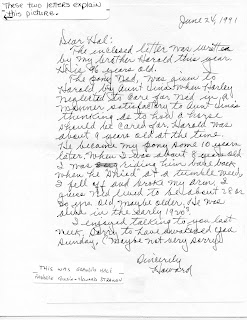 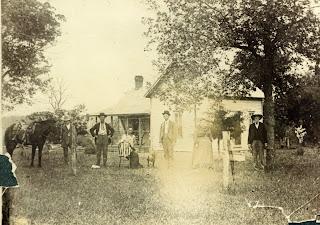 (These two letters explain the picture)
(First Letter)
June 24, 1991
Dear Hal:
The enclosed letter was written by my brother Harold this year. He is 96 years old. The pony Ned, was given to Harold by aunt Jina when Harley neglected to care for Ned in a manner satisfactory to aunt Jina's thinking as to how a horse should be cared for. Harold was about 9 years old at the time. He became my pony some 10 years later. When I was about 8 years old
I was riding him bare back when he "shied" at a tumble weed, I fell off and broke my arm. I guess Ned lived to be about 28
or 30 yrs old, maybe older. He was alive in the early 1920's. I enjoyed talking to you last week. Sorry to have awakened you
Sunday. (Maybe not very sorry)
Sincerely
Howard
*This was grandpa Hal's favorite cousin, Howard Straughn.
(Second letter)
The Picture
Grandpa Hohimer's farm home 2 miles south of Yale. It was 120 acres. Three 40ies in a row. Two weeks after the Sept 22, 1891 race at the opening of the Sac and Fox  Indian Reservation  He was in Guthrie examining the the records in the Land Office and found that this tract had not been filed on. He rode over there, about 50 + miles, from Guthrie and found a cow boy camped on it. The cow boy offered to leave for $25.00. Grandpa gave him the money and returned to Guthrie and filed on the land. Grandpa was a carpenter and with some help built that house. There was a ford on the Cimarron River 1/2 mile from his land and for many years, until they built a bridge, it was called the Hohimer Ford. He sold the farm in 1906 and took two residential properties in Yale as part payment. He had quite a large bee yard just east of the house. He is wearing his bee hat.
The Picture
LtoR
Ned (later given to me), Harley, Joe Fleming, Aunt Laura and baby Midge, Pup Joe's dog, Orvil, Melvina Hohimer, William Elias Hohimer
Harold
Thanks for stopping by!
Wishing you success in all of your genealogical treasure hunts!