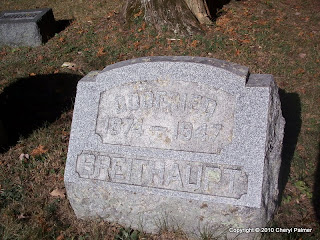 This headstone is a bit tough to read because of the lighting, but it says~


Gottfreid Breighthaupt ~
25 years of age, living with Jacob and Christina Breighthaupt, his parents, and a younger sister and brother, Anna and Jacob. Gottfreid and his family were all born in Germany, except for Jacob who was born in Pennsylvania. The family moved to the United States in 1882 and I imagine the spellings of the names changed  in order to be more consistent with the English language. As you know, this was such a common phenomenon, people immigrated to this country and changed their names and/or the spellings. In many cases Americans would spell immigrants names the way they heard them, not as they were actually spelled, thus inadvertently changing someone's name.
Godfried is not actually related to me. His brother Jacob was my grand uncle in law. When I went to Pennsylvannia to see my ggrandparents home, I found the gravesites of several of the Breithaupt family in Hawley.
Thanks for stopping by!
Wishing you success in all of your genealogical treasure hunts!