July 23, 2010
Do you have a copy of your ancestors World War Registration Card? 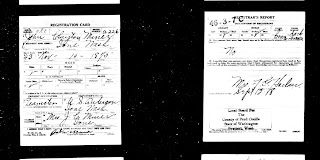 John C. Miner, my great grandfather, lived in Washington when it came time to register for the war. John was born in November 10, 1875 in New York. By the time he and my great grandmother, Gladys, gave birth to my grandmother, they were living on North Dakota.

John was 43 years old and living in Ione, Washington when he filled out this Registration Card. He stated he was white and a native born United States citizen who was a teamster employed by U. S. Anderson. Being of medium height, medium build with dark brown hair, brown eyes and married to "Mrs. J. C. Miner" (don't you just love that they don't give you the spouse's first name?) in Ione, Washington, he certainly didn't seem to have any real special or different characteristics about him.

What this Registration Card does inform me, is that his birthday matches information I already had, so another source record for me. The Registration Card does not tell me that he was born in New York. I have this information from other records. For me, the most important information on this card it the verification that he and his wife were living in Washington in 1918. Until I found this card a few years ago, I didn't have any idea they ever even lived in Washington. I had suspicions, but that is all they were, suspicions.

This card also verified that John was still married. It not only gave me his employment at the time, but the name of his employer also. As average as he sounds, his physical description was exciting and new information for me also! Plus it was stated that he had not lost an arm, leg or eye etc. In other words he was in one piece.  I do not have a picture of John C. Miner, I had no idea what he looked like. I would love one day have that privilege, own a picture of my great grandfather. For now, I can put together a mental picture of this basically average man, and that is better than nothing!