June 24, 2010
Well, here is was Sunday morning and time to check out. Rushing right along, trying not to be late, I packed up, checked out and headed over to Jamboree to meet Gini from Ginisology. We agreed to attend the lecture ~ Timelines and Chronologies: Secrets of Genealogical Success together. As a matter of fact, A.C. Ivory, from Find My Ancestor, also attended this lecture with us. Geoffrey D. Rasmussen was the speaker. I have to admit, I wasn't to hot on attending this, however, Gini really wanted to go. What a great lecture, I am SO glad I attended! Thank you Gini! We were all so impressed that immediately after the session we headed straight to the Legacy booth in the Exhibit Hall, where we proceeded to buy programs that were demonstrated at the session we had just participated in. Very impressed indeed! 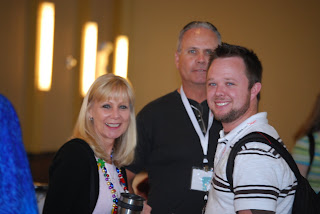 Gini, her husband Steve and A.C. Ivory
Gini, her husband Steve, and I continued to poked around for awhile in the Exhibit Hall, they must have loved seeing me spend my money! When I decided I had spent enough money, we chose to head over the the "unofficial  Blogger's Lounge" where we pulled up the computers and did some socializing. One thing about everyone having their laptops, we saw and learned a bit of what others have or do. Almost as good as another lecture! 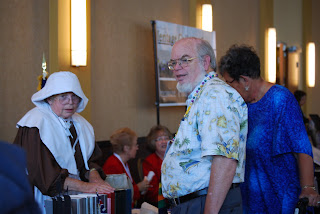 Randy Seaver
At 12:30 I attended Maureen Taylor's lecture ~ Hairsteria: Hair in the Family. Again, I thoroughly enjoyed this session. Maureen's lectures are so interesting. I have to admit, these last two classes I took notes and was so involved I didn't even think of taking pictures!

The last class I attended for Jamboree 2010 was: Finding the World with World Cat with speaker Curt B. Witcher. I personally have never used World Cat before so I was very interested in this session. I again took lots of notes and I'm anxious to explore when I find some time. As of now, two weeks later, I haven't even had time to read over my notes. But, I am happy to have been able to make all these posts about Jamboree! The notes won't be going anywhere.

After these classes, there was a half hour wait for the final drawings. A third IPAD was being given away and the grand prize for Jamboree, a weeks stay in Salt Lake City. The half hour wait made me very lazy, and I realized how tired I was. After the announcements of the winners, and neither were me, I decided I really needed to head on home as I had a good five hour drive ahead of me. I didn't make it back across to the main hotel to the "unofficial Blogger's Lounge" to say good by to those who hadn't left yet. I am sorry, saying good by is never easy, I would rather say hi and keep in touch!

I made good time coming home until I hit two accidents and traffic came to a halt. So, instead of it taking 5 hours, it took almost six, and I only stopped once for gas!

I feel so fortunate to have been able to attend Jamboree. I met so many wonderful people and was able again to see others I had met before. I had learned a thing or two, bought a thing or two, met a person or two, took a picture or two and had a blast! (or two!) I never would have thought Jamboree 2010 could be as good, if not better than Jamboree 2009! How can that even be possible? But it was... oh it WAS!