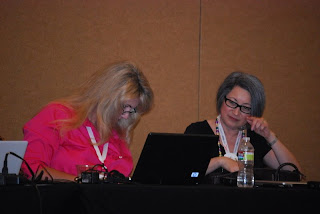 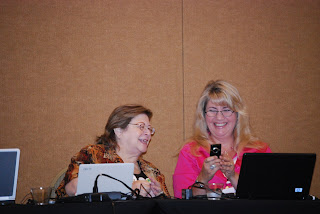 Part two was continuing on with after you have your blog; how to keep it fresh, beneficial and possibly profitable along with some other tips from the panel.

Also in the "Summit" room there was quite a conversation being carried on about this incident: 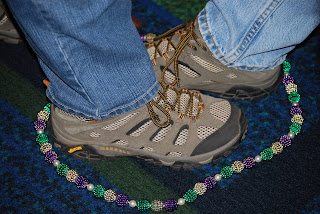 These are two GeneaBloggers who seem to have an awful lot in common! They had the same shoes, and each of them was wearing blue jeans and blue shirts. Pop Question! Do you know who they may be? Not fair if you attended Jamboree! I will leave this open for a couple days or so and give you the answer later on. In the meantime, I would love to read your guesses!

Next it was on to Lisa Lousie Cooke and her live Podcast. Interviewed were Maureen Taylor ~ The Photo Detective, Suzanne Russo Adams ~ from Ancestry, discussing research she did for WDYTYA , and Chris Haley ~ nephew of Alex Haley of "Roots" fame. It was both exciting and entertaining to be at one of Lisa's live podcast's. What was my biggest surprise? Well, actually there were two. The first one was the introduction of Lisa's grandson, who was a cutie. The second was listening to Chris Haley sing! It was great to be in the audience! Listen to the videocast for yourself!