June 25, 2010
Because I have scanned so many funeral cards and obituary's lately I have decided to post these items on Fridays, hence the title Funeral Friday. Some of these may not actually pertain to my family, however I wish to share what I have as they may be helpful to someone. Unfortunately, most of the newspaper obits do not list a date of print nor the title of the newspaper. I will try to give location and dates that may be helpful as I can. 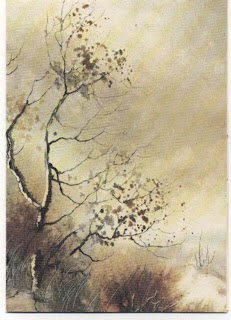 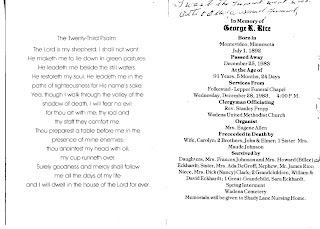 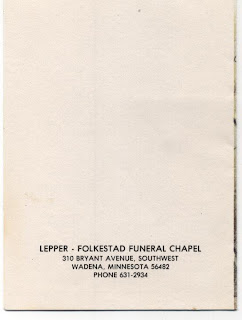 Handwritten inside on the top right side of the card is handwritten:
"I was to the funeral I went with Otto and Ellen, a small funeral"
This may have been written by Olga (Westby) Jordahl, my Great Aunt, to her sister, my grandmother, Thina Lundberg, because most everything in my grandmother's collect was written and sent to her by Olga.
On the left inside of the card The Twenty Third Psalm is printed. George Rice is not in my family tree at this point.
Thanks for stopping by!
Wishing you success in all of your genealogical treasure hunts!
*UPDATE ~ It has come to my attention that George Rice was the brother of Elmer Rice who was good friends of my grand uncle Karl Westby. June 28, 2010