June 18, 2010
Since I have scanned so many funeral cards and obituary's lately I have decided to post these items on Fridays, hence the title Funeral Friday. Some of these may not actually pertain to my family, however I wish to share what I have as they may be helpful to someone. Unfortunately, most of the newspaper obits do not list a date of print nor the title of the newspaper. I will try to give location and dates that may be helpful as I can.
There was not included a title of the newspaper, nor a date of when this was printed. 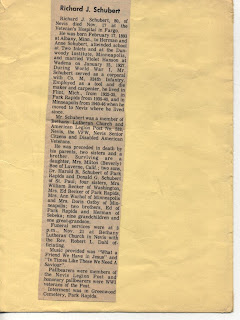 Richard J. Schubert
Richard J. Schubert, 80, of
Nevis died Nov. 17, at the
Veteran's Hospital in Fargo.
He was born February 17 1893
at Albany, Minn., to Herman and
Anne Schubert, atteinded school
at Two Inlets and at the Dun-
woody Institute, Minneapolis,
and married Violet Hanson at
Wadena on January 15, 1927.
During World War 1, Mr.
Schubert served as a corporal
with Co. M, 324th Infantry.
Employed as a tool and die
maker and carpenter, he lived in
Flint, Mich., from 1925-35, in
Park Rapids from 1935-40, and in
Minneapolis from 1940-46 when he
moved to Nevis where he lived
since.
Mr. Schubert was a member of
Bethany Lutheran Church and
American Legion Post No. 532,
Nevis, the VFW, Nevis Senior
Citizens and Disabled American
Veterans.
He was preceded in death by
his parents, two sisters and a
brother. Surviving are a
daughter, Mrs. Milton (Beverly)
Boe of Luverne, Calif.; two sons,
Dr. Harold R. Schubert of Park
Rapids and Donald G Schubert
of St. Paul; four sisters, Mrs.
William Becker of Washington,
Mrs. Ed Becker of Park Rapids,
Mrs. Ann Warhol of Minneapolis
and Mrs. Doris Ostby of Min-
neapolis; two brothers, Ed of
Park Rapids and Herman of
Sebeka; nine grandchildren and
one great-grandson.
Funeral services were at 3
p.m., Nov. 21 at Bethany
Lutheran Church in Nevis with
the Rev. Robert L. Dahl of-
ficiating.
Music provided was "What a
Friend We Have in Jesus" and
"In times Like These We Need A
Saviour".
Pallbearers were members of
the Nevis Legion Post and
honorary pallbearers were WW1
veterans of the Post.
Interment was in Greenwood
Cemetery, Park Rapids.
(The above was copied exactly how it was printed)
As of this date and time I do not show a family relationship with this person.
Thanks for stopping by!
Wishing you success in all of your genealogical treasure hunts!
*UPDATE ~ Richard Schubert and his wife Violet were good friends of my grand uncle Karl Westby and his wife Lillie. 6/28/2010
Copyright © 2010 By Cheryl Palmer
Funeral Friday Obit Schubert Westby