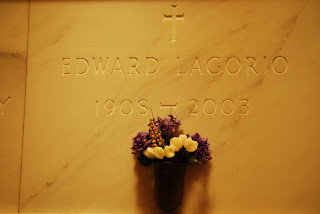 Edward Lagorio 1908-2003 A resident of San Leandro for 55 years, died peacefully at his home at the age of 95, with his family at his side, on December 2. Preceded in death by his beloved wife Frances (Alberti) Lagorio and his son, Edward R. Lagorio. Loving father of Beverly Sereda and husband, Robert; cherished grandfather of Kathleen Glaub (John), Robert E. Sereda, II (Laura), Carl and Christopher Sereda, and Claire and David Sereda. Dearest great-grandfather of Lisa and Michelle Sereda, and Kristen and Karl Glaub. Before an early retirement, Ed was a successful Oakland businessman and partner of Lagorio Bros. Wholesale Produce Co. for 30 years. During that time, Ed and his brother Tony Lagorio also farmed acreage on Bay Farm Island, Alameda. Ed was also an avid sportsman, very much enjoying fishing and hunting, bowling, playing cards, and organizing trips for members of SIRS branch #6. His private "Duck Club" was very important to him, and over the years he took great interest in training dogs to assist him when hunting. Ed also traveled extensively with his wife of 65 years, and he loved spending time with his six grand children outdoors and on trips. He will always be remembered for his ready smile and his heart handshake. He will be missed by many friends and extended family members. The Vigil will be held at the GUERRERO MORTUARY CHAPEL, 407 Estudillo Ave. in San Leandro, Sunday, December 7, at 4:00 p.m. Everyone to meet at The Assumption Church, 1100 Fulton Ave., San Leandro, Monday, December 8, at 1:00 p.m. for the Funeral Service. Interment will be at Holy Sepulchre Cemetery in Hayward. In lieu of flowers, donations may be made to the Assumption Foundation, Church of the Assumption, 1100 Fulton Ave., San Leandro, Ca 94577, or to Children's Hospital of Oakland, 747 - 52nd Street, Oakland, Ca 94609. Visitations will be Sunday, from 2:00 P.M. to 6:00 p.m. GUERRERO MORTUARY (510) 483-5300.