Those Places Thursday ~ A Sanchez Home 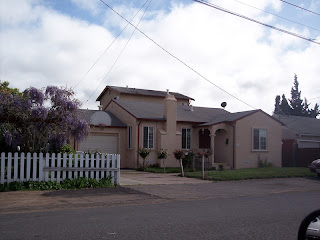 Sanchez home. March 2007. Hayward, California. Digital Image taken by Cheryl. [ADDRESS FOR PRIVATE USE] California. 2010
This was a surprise picture I ran across that I forgot I had. The Sanchez home was one of the houses my maternal grandparents lived in. This picture was taken in 2007 but my grandparents lived here about forty three years prior to this. Even though it has only been about three years since I took this picture, when I came across it again it looked so unfamiliar. Of course it wasn't labeled properly (remember to label those pictures as soon as possible so you don't forget their dates and or places) and it took me awhile to figure out where this house was located. I knew it belonged to the correct family, but I did want to place it in the wrong city at first. Thank goodness for Google, I looked the house up on the street where I thought it belonged, and came up with almost the exact image, so I knew I was correct.
I have one major memory of this location. One day my family was visiting my grandparents. I believe we were all inside the house at the time, when all of a sudden we heard a massive "boom." We all ran to the front of the  house and looked outside. The house across the street blew up! Well, I should probably rephrase that, the hot water heater blew up! This however made the windows of that house blow out. What I will never forget was the surprise I felt when I saw the glass from those windows had landed on my grandparents front porch! Glass was everywhere. My father even found glass in my grandparents backyard! From what I can remember, no one was injured luckily.
This house did not have an addition when my grandparents lived here, and I seem to remember the house was painted white at the time. One of the best things about it for a kid (which I was) was that this house is in a court, wow, we have room to play!
Thanks for stopping by!
Wishing you success in all of your genealogical treasure hunts!