Those Places Thursday ~ My Grandfather's Home 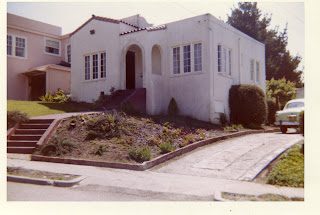 This photo is a picture of where my grandfather and his wife lived for as long as I can remember. I took this picture but am not sure exactly when. I lost the date when changing computers unfortunately. I would venture to guess it was taken somewhere between 2002 and 2007.
Two years after the Loma Prieta earthquake occurred in the San Francisco Bay Area in 1989, northern Oakland and southeastern Berkeley suffered from the Oakland Hills Firestorm. Sunday, October 20, 1991 was the day the fire broke out. It just so happened that my parents and family were at my house celebrating my mother's birthday when we heard about the fire on the news.
Immediately when we heard of the fire, my father was on the phone calling his father to see if the fire was in his vicinity. My grandfather was being evacuated from this home at that very moment! Thankfully, he his wife and his home all escaped the horrors of the fire. We were all extremely concerned because this home IS in the Oakland hills.
This fire killed 50 people and injured another 150. The destruction in the hills looked as if a bomb had blown up the whole area. Several weeks after the fact I was given a tour. My husband worked for the power company and was sent there for a week to work the fire damage. He knew exactly where to take me. It was very surreal. I vividly remember miles and miles of burnt homes, trees and property. I have never seen anything like that before or since.
There were 3,354 homes and 1,520 acres that were destroyed. Additionally, 437 apartments and condos were destroyed. The total loss was estimated at about 1.5 million dollars.
Thanks for stopping by!
Wishing you success in all of your genealogical treasure hunts!