August 13, 2009
I thought I would share with you one of my favorite places and pastimes, after all this will be saved for generations, right? So here is the McAfee Coliseum. 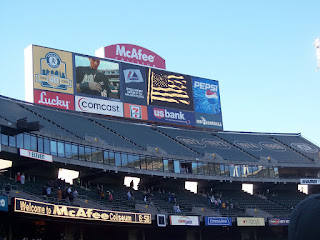 Home of the Oakland Athletics, or Oakland A's as I refer to them. 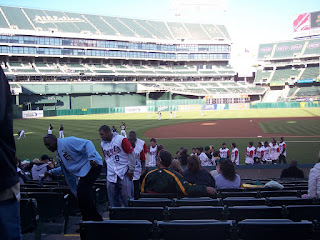 Next, you will see the years that the A's won pennants. 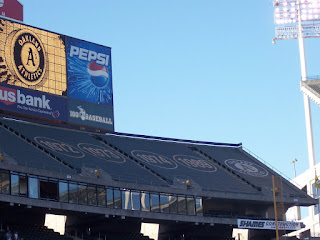 Of course, the following years were before my time! ;-) 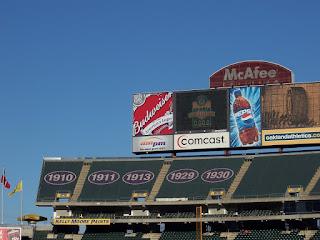 However, I do remember the next two pictures and all of the players! 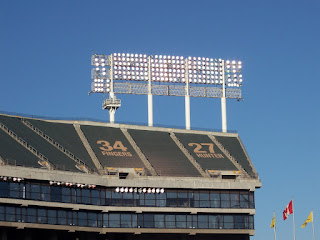 I learned to love the Oakland A's back in the seventies. My grandfather was an Oakland A's fan and because of him I started listening to the games on the radio. I knew I was really hooked when I was suppose to be in bed sleeping (there was school the next day) and instead of sleeping I had the transistor radio (am I aging myself or what?) on under my pillow, listening to the game. It didn't matter if the game went thirteen innings or all night, I listened to the full game, every time. I knew every player on the team back then and the players you see in these stands were who I was following. I knew the next time my grandfather came over, I was going to be able to follow what he was talking about, and even chip in with my own thoughts.

Now, I wonder, did my parents really not know what I was doing with the radio under my pillow?

These photos were taken in May 2008, when the family attended a game. It was my grandson's first baseball game, and he received a baseball from one of the attendants of the coliseum, who we happened to know. Back in the day when I listened to the team play on the radio, the home of the A's was called the Oakland Coliseum.