July 27, 2009
Wow, my apologies! It has taken so long for me to get all of the pictures and postings done from this fabulous event! The bad news is that I have been so very busy (sometimes life gets in the way) and haven't had time to post as I would have liked. The good news is because of my lack of posts I have kept the memories in my mind much longer and more frequently about Jamboree!

The last day of Jamboree started at a breakfast which was hosted by Family Tree Maker. There were, I believe, nine of us at the breakfast. The breakfast was absolutely wonderful, with way to much food. To bad I wasn't really awake enough to even think of taking a picture!

After breakfast, we were treated to first class info on the new Family Tree Maker 2010, which is not an upgrade, you need to buy this version. I have been a faithful Family Tree Maker customer over the years, but not sure I want to buy another new version just yet. Randy Seaver at Randy's Musings, has covered the information of this new version and the breakfast on his blog (yes, he was at the same breakfast) in detail, as he does with several programs. I left this breakfast meeting feeling that FTM 2010 was a good thing, but that there weren't enough upgrades to make me want to purchase the newest version at this time. 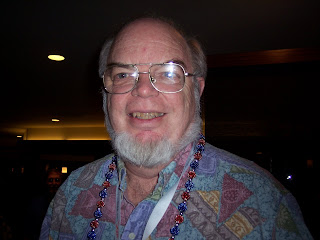 I am more apt to download RootsMagic and give it a try this year. Part of the wonderful "welcome bag" for the bloggers included a special gift from Bruce Buzbee, RootsMagic 4! I am excited to try it! I attended a RootsMagic Demo class given by Bruce, which was very interesting, and gave me the added "gun ho" to want to try it.
After an hour and a half of breakfast and Family Tree Maker 2010 info, I was off to my first class of the day, "Tracing Ancestors Who Lived in Cities." This class was taught by Arlene Eakle. I have never heard her lecture before and I just have to say, so glad I made this class! I didn't want it to be over and sorry I missed her other lecture. What a dynamo!
I mentioned already that I attended Bruce Buzbee's RootsMagic 4 Demo, this was right after Arlene Eakle's class. I look forward to downloading and exploring this program. I will report back on this when I finally get the chance to play. Thanks Bruce for everything, the program and the class! I had planned to attend his class even before I received the program as I was interested in it already. To actually receive the program also, was such a shock and added surprise!
Next was lunch, and I had the honor of a luncheon date with an online classmate from about 3 years ago, through Family Tree Maker. We have a group who still stays in touch from this class in an online forum. Actually, someone else was in attendance at Jamboree who is also in our group, Steve Danko. He was, of course, also invited to lunch with us, but understandably, he needed to prepare for his lecture which was right after lunch. We did however get a photo or two of all of us. I had met Steve before, a few times, but Diane hadn't so it was to bad he wasn't able to come to lunch.

I was rushing to meet Dianne Arnold for lunch and as I passed the "blogger lounge" I heard people calling me to come over. I felt so bad because I couldn't, and was in a hurry. It took Dianne and I three years to meet and we had maybe an hour to visit over lunch. I know the bloggers group were going to sign into Miriam's "Scanfest" and say hi. I would have liked to be a part of that also, but I did have my first commitment. Diane and I had a wonderful lunch and great time together. So glad we have finally met! There have been others from our group who have met each other but this was the first time three of us were together at once. 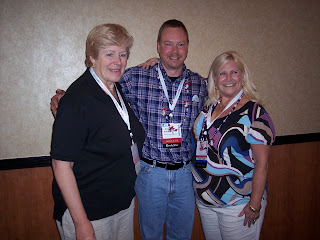 Dianne, I thank you for a great lunch together and so happy to finally have met you!

My final class for the day, I attended Lisa Louise Cooke's "Google-A Goldmine of Genealogy Gems ll." I wanted to attend the first part also, but the RootsMagic Demo interrupted that. I had been in attendance to one of Lisa's presentations before, so opted to listen to Bruce and catch Lisa's second presentation. She didn't disappoint me either! More to learn, always more to learn! She had a super packed attendance, two rooms opened to one and standing room only.

This day was by far the best "complete" day of classes I attended, either by speakers I wanted to hear and or subject matter that interested me. But, it was the final day. Bummer, although how else would you want to end the weekend at Jamboree, making me want for more! Can not wait until next year!

Again, I want to thank EVERYBODY, and everybody AGAIN! It was SO WONDERFUL to meet all the new people I met! Such a wonderful group of genealogists. Everything, in every way, was very special to me, so if you were involved at all, I thank you.
One thing I do regret, is that I didn't make time to lounge in the "bloggers lounge." :-( I was to busy worried about classes and speakers. I enjoyed that, but I should have taken an hour or two just to veg with the genea-bloggers. My mistake, that won't happen again! I would have loved to spend "quality" time with those I didn't get to. Next year. Next year if I am still around and blogging, you bet I will be in the "genea-bloggers lounge," so watch out!

I also look forward to the next genea-bloggers dinner. It was indescribable! I was so busy taking pictures though, that I didn't get around to visit as much as I would have liked. What an awesome time that dinner was! Speaking of which, I did want to share one of the dinners with you all and have one question, ok, maybe two questions: 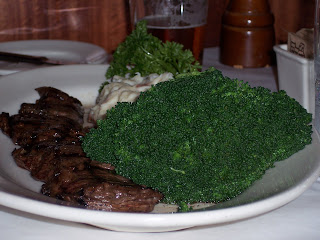 Number one-Does this make you hungry? Number two-Don't you think there should be more broccoli?
Last but not least, I would like to thank Sheri Fenley for keeping me company on the ride down and back, for sharing a room with me, teaching me a thing or two and over all being a great person to hang with! I don't think we could have found much better roomies for each other, I think we did well together, and I sure enjoyed it!
Ok, one more photo before I finally give up the Jamboree posts. Oh darn, again we will make it two. 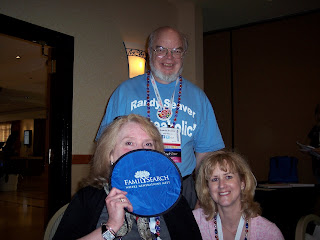 I do have this photo of footnoteMaven, along with Randy Seaver and Elizabeth O Neil. Here you can't see fM (I DO have a picture of her where you can actually see her, but I won't post that one unless and until she approves that) but you can tell the following picture isn't her again. So who is this person behind the scenes? 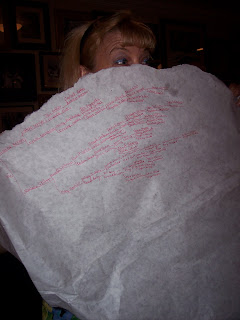 Thanks for stopping by!
Wishing you success in all of your genealogical treasure hunts!
Arlene Eakle Bruce Buzbee Elizabeth O'Neil footnoteMaven GeneaBloggers Randy Seaver Sheri Fenley So Cal Jamboree