July 11, 2009
Saturday's "Summit 2 : Son of A Blogger" ended at noon. Just in time to have some lunch. Gini Webb, of "Ginisology," and I tried to plan some time to spend together on this day as it was the only day she would be attending the Jamboree. Lunch didn't pan out between her and I, but I lunched with the company of Craig Manson and Randy Seaver. We ate outside and it was a wonderful lunch with wonderful people! 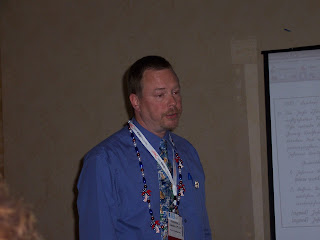 I headed to Steve Danko's class "Genealogy and the Changing Map of Eastern Europe." Steve gave me insight to things I didn't think I even wanted to know! I enjoyed his lecture and even heard later he was surprised to see me in his class. I hope I didn't make him to nervous, that wasn't my intention! I was there to support him! Steve an I met a few years ago in an online class and have been in contact with each other since then, a group of us from the class still stay in touch at our class site. Steve did an awesome job, I was so happy to hear him give a lecture and be there to support him! (Not that he needs any support!) 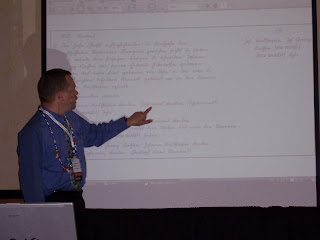 Prior to heading to the next class I wanted to attend, I went through the vendor area and spoke with Janet Hovorka at her "Generation Maps" table. She had so very kindly donated a certificate to the Genea-bloggers "welcome bag." I had given her my ancestors tree on a memory stick earlier and wanted to find out how much it would cost to get a tree printed. When I went back for the price, I found out that my tree had been prioritized so she couldn't see everyone. This had me running to my car clear across the parking lot, in the heat, for the laptop to find out why. I hadn't prioritized my tree that I could remember! Back to her booth, tried to pull up my tree, but it took forever!!!! So, I told her I would be back after the next class.
I was late entering DearMyrtle's class,"7 Habits of Highly Effective Genealogists." Here I enter, she is already speaking, I have my laptop open and trying to boot up. Again, I was suppose to hook up with Gini Webb. I see her and the seats were taken by her, but there was a chair available in front of her. Now I had to interrupt these poor people, I traipsed over them with my laptop and sweat to get to the seat. I am sure they wanted to throw me out! I wouldn't have blamed them either! By this time I had been perspiring like a pig, ok down right sweating! And then, being squished in the middle of people, I felt so uncomfortable, I was waiting for one of my neighbors to ask when I had showered last.
The class? I missed most of it, even though I was in attendance. The laptop was a pain, I spent most of the time in this class getting it to boot up and then bring up my family tree, only to find it hadn't been prioritized at all! Now what? Well, the memory stick I had (which was Sheri Fenley's) I had given to Craig Manson to borrow to download his tree on. Not knowing what Sheri had on the stick and being in a hurry we had deleted my info for his. Now I had to delete his and put mine back on. Ok, so off to try this again, and low and behold, that is where my tree got prioritized the first time, during the download! This time I made sure it wasn't prioritized. I did catch the last 20 minutes or so of this class, and bits and pieces in between. Enough to get some notes and get the idea of it all. I was glad when the class was over, I needed air! But, again, I didn't get to chat with Gini.
Ok, back to the Generation Maps table to drop the memory stick to Janet, again. On to the next class which was Christopher Child's class "Researching in New York." I know I took notes in this class, and I heard the lecture, but did I grasp anything? I am not so sure, I remember a few things he shared, but I think I spent most of the time here unwinding! Darn, it would have been so much better if I had absorbed more! Will have to look at my notes to see what I missed, if I actually noted anything...
Back to the Generation Maps table, and Janet was finally able to give me some info. She asked how many people I had in my tree. I told her, I knew. Then she told me what she saw. I thought, now how can that be? She gave me a printout of my direct line of ancestors, and I told her that was fine. Upon leaving, I wondered, now where did all my other people go? Eventually I did figure it all out, I did get my printout and I was glad the ordeal was over! I felt so bad for Janet and her husband, I wasted so much of their time with issues. They were so sweet and never complained, did my printout with a smile, it made it better I think as it was very small! Whew, something went right for them!
Fifteen minutes after the last class I took, there was a scheduled "Facebook and Twitter Meet", which Sheri and I opted to miss. I needed to get back to the room and get the sweat off me, where is the shower???? This evening was our dinner with the bloggers, I had to clean up! Next Post -"The Genea-Blogger Dinner."
Thanks for stopping by!
Wishing you success in all of your genealogical treasure hunts!
Christopher Child Craig Manson DearMyrtle GeneaBloggers Generation Maps Gini Webb Ginisology Janet Horvorka Sheri Fenley Steve Danko Summit 2: Son of a Blogger