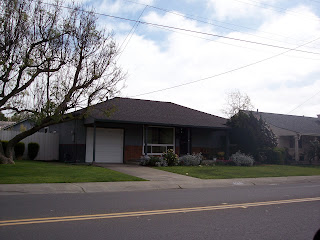 This is the last home my maternal grandmother lived in before she passed away. At this time her name was Betty Sanchez, she was married to Raymond Sanchez. They were married as long as I can remember. I do not have the information of when they were married. I am still working on a birth certificate for my grandmother.

This home was on the pathway to the high school I attended. Many times walking home from school I would stop and visit my grandmother. When she became legally blind I felt so bad for her because she couldn't drive anymore. I vowed when I received my drivers license I would help to drive her everywhere! In the meantime, a bus stop, which was a house or two down from her home, provided transportation for her when my mother wasn't available.

In the backyard was a wonderful apple tree, green apples! We enjoyed picking and eating them, when there weren't worm holes in them. They were my favorite.

I helped clean my grandmother's house when I was a teenager. When she became legally blind, (she had cataracts, but I am not sure that was the exact reason she was legally blind) it was difficult for her to see dust and dirt. I specifically remember cleaning her phone, and cupboards in the kitchen. I wonder why I distinctly remember cleaning those things?

Grandma owned a console radio and record player. I would turn on the radio and change stations for her when I was there cleaning. She loved listening to talk shows, and I remember her listening to "old fuddy duddy music." (What else would a teenager think?)My mother took care of her bills, wrote the checks.

When my grandmother lived in this house, it was painted a light color and the front door was always open. The house had three bedrooms, my grandfather slept in one and she in another. I can't remember much about the third bedroom.

I don't remember her having a photo album one, it was as if she didn't have any. I do not have a single picture of her as a child or teenager. If she did have any, I wonder what happened to them? My sisters and I and one cousin are the only descendants from my grandmother. There is so much information we need to learn about her.

The picture of this home brings back many wonderful memories for me.