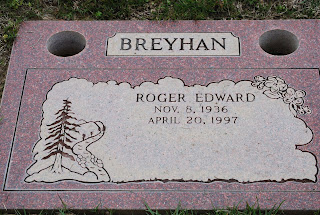 Roger Edward Breyhan was born in Salt Lake City, Utah on November 5, 1936. He passed of a massive heart attack on April 20, 1997 in Alameda County, California. Roger was my “Uncle In Law” whom unfortunately I never had the opportunity to meet. I recently found out he was buried at Lone Tree Cemetery in Hayward. My aunt was kind enough to take me up there to show me exactly where he rests.

Wishing you success in all of your genealogy treasure hunts!