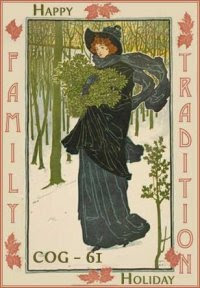 As a child I believe my family made it's own traditions. I really don't know of any that were truly passed down.

Christmas Eve was always spent at my maternal grandfather's house. They had an artificial flocked tree that they never took down! Each season when Christmas was over they moved the tree into a spare bedroom and threw a sheet over it. Then the following Christmas out it came and the sheet disappeared. My grandmother did most of the shopping and my grandfather wrapped all of the presents. I actually have a package of bows that my grandfather wrote on that has never been opened. He passed away in 1979.

Usually there would be my family, my aunt and her family and my grandparents for Christmas Eve. Maybe between eight to thirteen of us. I always was very excited about going there, they got us the best presents! Grandpa played Santa and enjoyed handing out the presents.

By the time we got home us kids were either asleep in the car or immediately passed out after hitting our beds. We were never awake enough to hear or try to see Santa, we were always sawing logs! And I can never remember leaving out cookies and milk either......

Christmas morning my mother spent preparing food for dinner. We never opened our gifts until afternoon. One o'clock was the time my maternal grandmother and grandfather came over. This was tradition as every year us kids had to be patient and wait all morning long before we ever got close to those gifts!

After gifts, we went off to play with our new things, and a couple hours later we would have dinner, which was always turkey and the fixings.

As an adult I have started my own traditions. I have been a Christmas fanatic. I decorate like crazy, which no one in my family has ever done. I started having Christmas Stockings after J was born, we never had stockings when I was growing up. I made J's first and only stocking. To this day almost 30 years later, she doesn't want a new one, and I keep thinking she really needs one.

Christmas Eve is left to each of us to do as we choose, visit relatives, friends go to church, whatever everyone wishes. Christmas Day starts at our house about eight am. We put on Christmas music, have coffee or hot chocolate and attack the stockings. After this we usually need refills, bathroom breaks and stretches and then we start on gifts. C usually plays Santa. The gifts all get passed out and then they are opened one at a time. This process can take anywhere from a couple to three hours.

Breakfast is on the agenda next. We clean, cook and eat. Then J and her family leaves to visit some friends. During this time I start preparing food for dinner.

Mid afternoon J and her family comes back, other family members and friends come by and we exchange gifts. At this point most are here for dinner. After dinner everyone is ready to crash.

J asked me yesterday if I was going to put out all my decorations this year. (The last couple years I have been a bit laid back and pretty much only had the tree.) This was the hint that she missed the crowded house where everywhere you looked there was Christmas. I told her I would do better this year. So, I have already started decorating in the house!

Something new J. and I are going to do this year is spend a day making cookies. I generally don't bake much, as I will eat whatever is baked, but this year we decided to get together and bake for some gifts. Who knows maybe another new tradition? If C didn't live so far away she would be baking with us too!

This was written for the 61st edition of the Carnival of Genealogy.