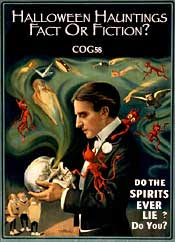 There were two women who lived together for many years. These were the later years of their lives. They did just about everything together, shopping, meals, day trips to the market and such. They were great companions for each other. Conversation, communication and companionship made the arrangement wonderful for both of these women.

Eventually though, the conversation became less, communication varied. One night the younger of the two women was totally exhausted, went to bed, called it a night. She was in peaceful calm sleep, dreaming away. All of a sudden her eyes opened, she instinctively knew something wasn't quite right. What she saw frightened her terribly!

There, along side of her bed was the other woman, standing in the pitch dark of night. But that wasn't the worst of it! This other woman was bent over the bed with a pair of scissors in her hand aiming them at the younger woman's chest...............READY TO STAB HER!!!

The younger woman couldn't imagine if this was a dream or reality! What happened next???

Find out in a later edition!

This is posted for the 58th Edition of the Carnival of Genealogy "Halloween Hauntings - Fact or Fiction?" After all entries for this carnival have been posted, the time will eventually come to find out if the entries are really fact or fiction. Come back to find out the truth!

So what do you think? Is this story fact or fiction? Please leave comments and let me know your thoughts!